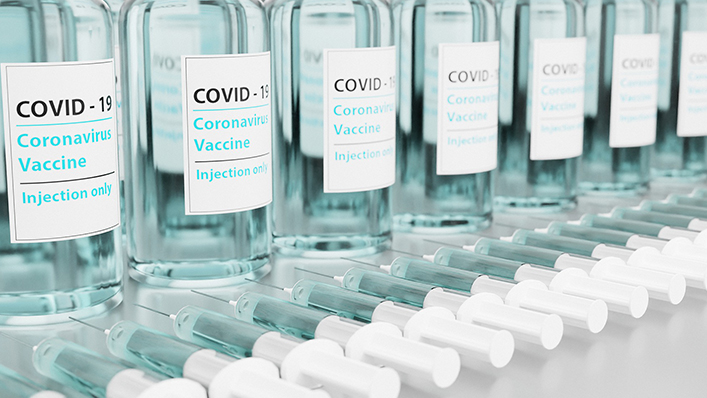 Members continued discussions on the role of intellectual property amid a pandemic and how the WTO and other stakeholders can engage to ensure secure and rapid access to vaccines and other medical products needed to combat COVID-19. At a meeting of the Council for Trade-Related Aspects of Intellectual Property Rights (TRIPS) on 10-11 March 2021, members also considered the continued exemption of least-developed countries (LDCs) from TRIPS obligations and broadened their debate on the relation between IP and innovation to cover small business and green technologies.

Continuing their discussions held since October 2020, WTO members addressed the proposal (IP/C/W/669) submitted by South Africa and India calling for a waiver for all members of certain provisions of the TRIPS Agreement in relation to the “prevention, containment or treatment” of COVID-19. According to proponents, the objective is to avoid barriers to the timely access to affordable medical products, including vaccines and medicines, and to the scaling-up of manufacturing and supply of essential medical products.

The waiver would cover obligations in four sections of the TRIPS Agreement — Section 1 on copyright and related rights, Section 4 on industrial designs, Section 5 on patents and Section 7 on the protection of undisclosed information. It would last for a specific number of years, to be agreed by the General Council, and until widespread vaccination is in place globally and the majority of the world’s population is immune. Members would review the waiver annually until termination.

Since its submission, the proposal has been co-sponsored by Kenya, Eswatini, Mozambique, Pakistan, Bolivia, Venezuela, Mongolia, Zimbabwe, Egypt, the African Group and the LDCs Group.

At the previous meeting of the Council on 23 February, members agreed on an oral status report to the General Council reflecting the state of discussions and lack of consensus on the waiver request. The report indicated that the TRIPS Council had not yet completed its consideration of the waiver request and would therefore continue discussions and report back to the General Council.

Members reiterated their common goal of providing timely and secure access to high-quality, safe, efficacious and affordable vaccines and medicines for all, but continued to diverge on what role IP played in achieving that goal. Proponents argued that existing vaccine manufacturing capacities in the developing world remained unutilized because of IP barriers, and hence insufficient amounts of vaccines were being produced to end the pandemic. In their view, the waiver proposal represents an open and expedited global solution to allow uninterrupted collaboration in the production and supply of health products and technologies required for an effective COVID-19 response.

Citing the role of IP as an incentive for innovation to fight the current and future pandemics, and as underpinning the licensing, manufacturing, procurement and distribution of COVID-19 diagnostics, therapeutics and vaccines, other delegations welcomed further engagement on the questions they had raised with regards to the proposal. They urged an evidence-based discussion on any concrete examples where IP would pose a barrier to manufacturing and access to vaccines that could not be addressed by existing TRIPS flexibilities.

The outgoing chair of the TRIPS Council, Ambassador Xolelwa Mlumbi-Peter of South Africa, said swift action is urgently required to help scale up COVID-19 vaccine production and distribution.  She called on members to shift gears and move towards a solution-oriented discussion.

The next regular TRIPS Council meeting is scheduled for 8-9 June, but members agreed to consider additional meetings in April in order to assess potential progress on the IP waiver discussion.

Members also discussed a request by the LDCs Group (IP/C/W/668) to once again extend the transition period for LDC members under Article 66.1 of the TRIPS Agreement. Under this provision, LDCs are given an extended transition period to apply provisions of the TRIPS Agreement in recognition of their special requirements, their economic, financial and administrative constraints, and their need for flexibility in order to create a viable technological base. The transition period has been extended twice and is currently set to expire on 1 July 2021.

Delegations were in principle favourable to the extension. Some members expressed full support for the extension as requested (for as long as the member remains in the category of LDCs and for a period of 12 years from the date of entry into force of a decision by the United Nations General Assembly to exclude the member from that category). Other members expressed a preference for extending the period for a limited number of years, while others had additional questions on how the request for a transition period for countries that have graduated from LDC status related to Article 66.1.

Continuing the theme of IP and innovation regularly featuring on the TRIPS Council agenda since 2012, the Friends of IP and Innovation (Australia, Canada, Chile, the European Union, Japan, Singapore, Switzerland, Chinese Taipei, the United Kingdom and the United States) proposed to discuss the topic of “Making MSMEs competitive in green tech” (IP/C/W/675).

The submission presents intellectual property rights (IPR) approaches for making micro-, small and medium-sized enterprises (MSMEs) competitive in green technologies and makes the case for MSMEs playing a pivotal role in ongoing technology change towards greater sustainability. Co-sponsors underlined that MSMEs account for more than 50 per cent of employment and can constitute core engines of innovation and growth. Therefore, the role of IPRs to enhance their competitiveness should be looked at closely.

There are various ways in which MSMEs can make use of the IP system to become more competitive in the field of green technologies. These range from taking advantage of international and regional IP application and registration mechanisms and using international platforms for sharing information and opportunities for partnership and collaboration to national solutions such as fast-track patenting or even on-demand support facilitated by IP offices. Through these efforts, progress towards more sustainable technologies can be accelerated, in turn fostering innovation and providing opportunities for cooperation in the green technology sector, proponents said.

LDCs and developing countries agreed on the importance of discussing this issue as access to green technology would contribute to boosting their competitiveness while respecting environmental imperatives. However, they highlighted the lack of a viable technological base, particularly in LDCs, and stressed the need to benefit from more effective technology transfer. This would not only serve to increase their levels of production but also to provide them with technology that enables the sustainable and environmentally friendly development of new products, they said.

The meeting of the TRIPS Council was attended by a group of capital-based experts and delegates from LDC members and observers who participated in the Workshop on the Implementation of Article 66.2 of the TRIPS Agreement on 2, 4 and 5 March organized by the WTO Secretariat. Article 66.2 calls on developed countries to provide incentives to enterprises and institutions in their territories for the purpose of promoting and encouraging technology transfer to LDCs in order to enable them to create a sound and viable technological base.

On the initiation of non-violation and situation complaints under the TRIPS Agreement, and following the General Council decision of 10 December 2019 to extend the related moratorium until the 12th Ministerial Conference (MC12), members discussed whether elements of agreement could be identified in order to advance discussion towards a concrete outcome. This question concerns the longstanding discussion of whether — and under what circumstances — members should have the right to bring disputes to the WTO if they consider that another member’s action or a particular situation has deprived them of an expected benefit under the TRIPS Agreement, even if no specific TRIPS obligation has been violated.

The chair noted that there are now only eight months left before the Council is due to report again on this issue and called for discussions to focus on concrete suggestions for the Council’s recommendation to MC12, scheduled to take place the week of 29 November 2021 in Geneva.

The chair reported that, since the last TRIPS Council regular meeting in October 2020, the Gambia had deposited on 20 October 2020 its instrument of acceptance for the protocol amending the TRIPS Agreement. Also, on 1 January 2021, the United Kingdom confirmed its continued acceptance of the protocol.

To date, 132 members have accepted the TRIPS Amendment, which entered into force on 23 January 2017, securing for developing countries a legal pathway to access affordable medicines under WTO rules. The chair encouraged the remaining 32 members to expedite action in good time before the current deadline for acceptance, which was extended until 31 December 2021.