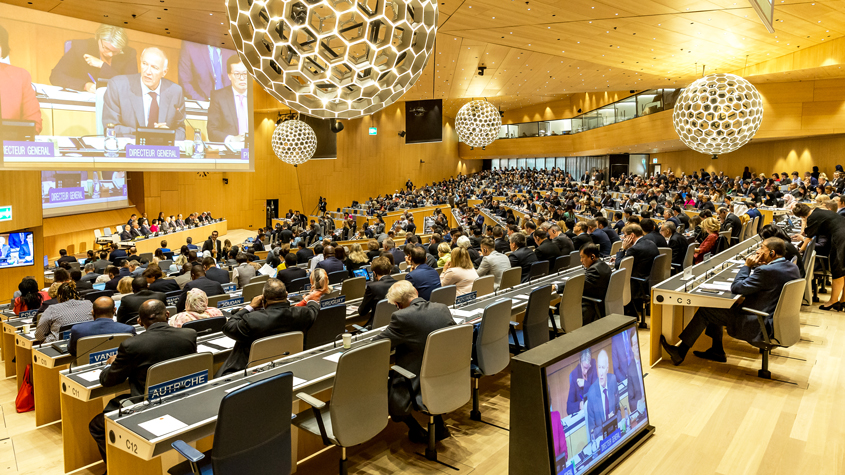 “The financial situation of the Organization, driven by market use of our Global IP systems, is sound and stable. We ended 2018 with a surplus of 42.5 million Swiss Francs.  At this stage of the year, we expect that 2019 will also result in a healthy surplus,” he said in an address to over 1,000 delegates at the opening the Assemblies of Member States of WIPO: Fifty-Ninth Series of Meetings.

The Director General noted that “the increased prominence of IP has brought with it new challenges for both IP and the Organization.  One of those challenges, which affects all national and regional IP Offices, as well as WIPO, is the management of the growing demand for IP titles in a way that ensures the timely and high quality administration of IP applications.”

Mr. Gurry said new tools were needed to assist IP offices around the world to deal with the massive increase in the volume of IP applications, noting that the Organization has been “at the forefront of the development and deployment of new artificial intelligence (AI) applications for this purpose.”

“Artificial intelligence is coming to our rescue,” he said, while outlining a series of new AI applications developed by the Organization, such as WIPO Translate, a brand image search system and an improved system to manage records of meetings.

In addition, the Director General pointed to challenges raised by new technologies, such as AI, for the substance of IP policy. He said these “are raising new questions about the application of existing IP policy, as well as the major question of whether the classical system of IP needs adjustment to cover perceived gaps in order to ensure that the IP system continues to serve the innovation ecosystem effectively.”

Mr. Gurry welcomed a conversation among member states on AI and IP,  saying: “We are getting to the stage where we can see a process going forward for the identification of the issues that are important in the intellectual property field in this very challenging area of a new general purpose technology in the form of artificial intelligence.”

Nonetheless, he said, pressures on the multilateral system “are impairing its capacity to produce timely results in the normative area, not the least of which is the faltering political will to adopt a multilateral approach and to develop multilateral solutions.”

He said neglect of the multilateral system could lead to incoherence in the regulatory framework that applies to these internationally deployed technologies.  “Ultimately, a race to develop the global rule or solution through national or regional regulatory competition, as opposed to a multilateral approach, will erode the value of the technologies themselves and their useful economic and social deployment.  Technical operability depends on regulatory operability.”

Mr. Gurry presented a comprehensive written report to the Assemblies but in his opening statement highlighted a few of the Organization’s many achievements, including:

Speaking to the agenda of the Assemblies, Mr. Gurry called on member states to adopt the program and budget for the 2020/21 biennium.  He said major progress had been made in the Program and Budget Committee in preparation for the Assemblies and only one item was outstanding.

He also urged member states to agree on the convening of a diplomatic conference to adopt the proposed Design Law Treaty.  The agreement would benefit designers seeking design protection by simplifying and harmonizing a number of filing rules that currently vary greatly by country.

Further, Mr. Gurry welcomed reaction to a proposed new and improved system for record management of meetings as well as a digital time stamping service providing IP services that are appropriate for the digital age and hoped these would be adopted by member states.

The Director General thanked WIPO staff for their “dedicated professionalism” and ability to adapt to the digital transformation of the Organization. He also underlined the Organization’s commitment to geographical and gender diversity.

The WIPO Assemblies are meeting from September 30 to October 9, 2019. The General Assembly is chaired by Ambassador Duong Chi Dung, Viet Nam’s Permanent Representative to the United Nations and other International Organizations in Geneva.