Access to digital transactions leads to the financial inclusion of the unbanked, underbanked and vulnerable populations while boosting the resilience and growth of Micro, Small and Medium Sized Businesses.

Digital payment systems are emerging catalysts in the push for financial inclusion in Latin America and the Caribbean (LAC).

Access to digital transactions creates new financial linkages for the unbanked and underbanked. Additionally, connectivity to digital payment systems has an undeniable positive impact on the resilience and growth of small businesses and access to formal financial services by women.

A significant unbanked population exists throughout LAC as approximately 26% of adults did not have a bank account in 2021. This, compounded by the fact that cash transactions remain dominant in the region, has led to significant funding gaps and the deepening of financial vulnerabilities. In a region of socio-economic inequalities and significant levels of crime, the high prevalence of cash transactions lends to the passage of corruption, evasion of taxes and anonymity in criminal activities. 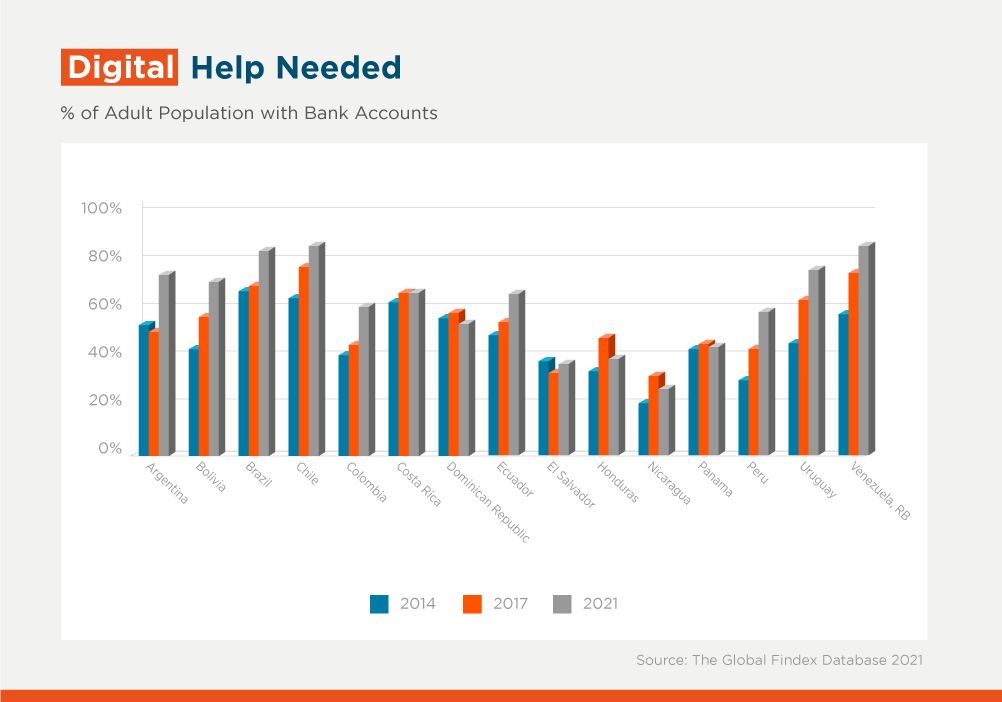 The COVID-19 pandemic drew attention to the socio-economic gaps of the region; an estimated 4.7 million people were pushed into poverty and economic vulnerability in LAC in 2021. Furthermore, those who were unbanked faced the added risk of being locked out of a touchless and digital payment ecosystem as many businesses evolved towards online sales.

While a significant gap remains, the leap in the number of banked persons in LAC was primarily due to the acceleration of digital payment systems in Brazil. In 2014, 48% of people in the region were unbanked, and this declined to 26% in 2021. During the same period, Brazil saw its share of the unbanked population move from 32% to 16% which weighed heavily in the aggregate regional measurement, as the most populous country.

In response to the pandemic, many central banks and governments in the region were successful in the implementation of innovative regulatory and digital solutions to deliver benefits to the most vulnerable groups and therefore mitigate the economic impacts of the health crisis and resulting lockdowns. In November 2020, at the peak of the Covid-19 pandemic, The  Central Bank of Brazil (CBB) launched PIX, a national digital payment system. The concept was largely inspired  bythe Asian model of super app ecosystems which have proven successful in obtaining reliable user flows and dependency through the adoption of their social payment platforms. The CBB’s initial intention for PIX was to facilitate digitalization while developing a common settlement infrastructure for the country. However, the app’s crowning success was onboarding a significant number of underbanked and unbanked persons during the pandemic. Between November 2020 and March 2022, PIX allowed over 40 million people to conduct their first banking transfer.

The World Economic Forum reports that Brazilians are adopting payments faster than anyone else in the world, largely due to the emergence and adoption of PIX. Since the launch of the app and up until March 2022, the number of PIX users skyrocketed to over 124 million, and a recent report by the Bank for International Settlements (BIS) found that the adoption rate of PIX in the first six months since launch took similar systems in some OECD countries more than 10 years to achieve.

Brazil has bold plans for PIX including the introduction of PIX Garantido, which will extend consumer credit to users via guarantees provided by financial institutions. This has the potential to benefit MSMEs in the extension of automated credit to customers and creating a competitive environment in the alternative credit space for unbanked persons.

Similar financial inclusion initiatives have recently been accelerated in Colombia and Argentina. In Colombia, the Government introduced direct social transfers into accounts or mobile wallets. This was an ambitious initiative which provided direct cash payments to over 1.7 million previously unbanked citizens. These transactions were processed through mobile wallets especially for those recipients without bank accounts.

In the Caribbean, cash continues to dominate despite the increased use of payment card systems, from 62 million cards in issuance in 2012 to 89 million in 2021. While issues of interoperability and banking regulations stymie the adoption and creation of digital payment systems in the Caribbean, public and private sector bodies are pushing forward with reforms which may have an impact for future use. The central banks of Trinidad and Tobago, Jamaica and Barbados have created regulatory sandboxes to explore test cases of fintechs, e-money issuers, digital currencies and digital wallets. In the private sector, emerging fintechs like Wipay Caribbean and PayWise of Trinidad and Tobago and SurePay in Barbados have leveraged on the high mobile penetration rates in the region to provide bill pay and consumer purchase services.

In October 2021, IDB Invest made a $7.5 million equity investment in preferred shares of RecargaPay Holdings, a fintech that provides a variety of digital payment solutions to consumers in Brazil. While challenges remain in the progress towards inclusive banking systems, changes to regulatory regimes and emphasis of digital infrastructure are winning formulas in the acceleration of the use and adoption of digital payment systems.