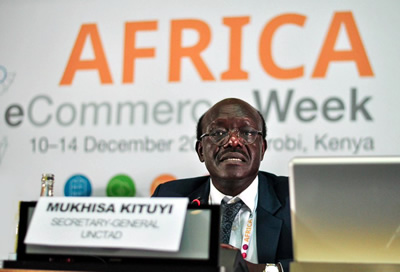 NCTAD’s Africa eCommerce Week in Nairobi, Kenya, focusses on what must be done to speed up the readiness of African countries to engage in and benefit from e-commerce.

Key findings from assessments of what African countries need to do to benefit from e-commerce and the digital economy were at the centre of discussions on 10 December at the first ministerial roundtable at UNCTAD’s African eCommerce Week in Nairobi, Kenya.

The assessments show that vast reforms are needed to seize the development opportunities offered by e-commerce. But they also help African countries to identify opportunities, barriers and relevant policy measures required to improve their readiness to engage in and benefit from e-commerce.

Opening the 10–14 December conference, UNCTAD Secretary-General Mukhisa Kituyi said there was a sense of urgency that Africa was being left out of the discourse on e-commerce that had already taken place elsewhere.

“That’s why this meeting is important,” he said. Rapid eTrade Readiness Assessments were unique products that had been much in demand by African governments, he said.

“Faced with current global trade challenges, many countries are moving forward with e-commerce strategies, but it is important that governments include all stakeholders,” he said.

The demand for eTrade Readiness Assessments was spreading fast, and beyond the least developed countries, Dr. Kituyi said. “The appetite is growing, but the laggards lie on this continent.”

Dr. Kituyi added that it was important to remember that building e-commerce ecosystems in Africa was not only about consumers being enabled to buy goods “made in India, made in China” but for the world to buy merchandise “made in Africa”.

Economic Commission for Africa (ECA) Executive Secretary Vera Songwe said that the question was how African countries could build the systems that would allow them to compete in world markets, and to identify the right e-commerce strategies for them.

“We at the ECA say this must be done within the context of the African Continental Free Trade Agreement, and that Africa has a long way to go in intra-continental levels of trade compared to other global regions,” she said.

“As we start our drive to deeper trading we must ensure that no one is left behind,” to avoid the kind of backlash against globalization the rest of the world had seen, she said. “E-commerce allows us to do trade more inclusively.”

She said that harmonization was critical so that “Angola can talk to Egypt and Zimbabwe can talk to Senegal.”

The millions of Africans without any means of identification, online or off, was an issue that the ECA was working on she said, along with other ways to bring women and informal businesses into formal economic activity.

Universal Postal Union (UPU) Director General Bishar Hussein said: “The importance of the postal sector for the e-commerce sector has been underlined in the eTrade Readiness Assessments.”

In Africa, private initiatives to set up e-logistics services have met regulatory and legal barriers which national postal services can overcome, he said.

The UPU was active in supporting national postal infrastructure reform in Africa, and this was more important than ever as the e-commerce revolution rolled across Africa.

“We need to have a continental e-commerce strategy because without it we will fail,” he said. “Africa is not a dumping ground for things produced outside the continent. It can and must trade with itself, and we are ready to support this.”

International Trade Centre (ITC) Executive Director Arancha Gonzalez said: “Many people talk about the Fourth Industrial Revolution but in reality, we are living the First Digital Revolution: Africa must make its mark.”

The ITC could contribute to the work done in the eTrade Readiness Assessments by advancing “actionable strategies” in the countries where it works to support entrepreneurs and SMEs in Africa, she said.

Ms. Gonzalez said that the ITC could act as a bridge between e-commerce companies already operating in Africa, governments in the process of making new policies, and World Trade Organization talks.

“For the first time in history, Africa has the chance not to be a rule-taker and to shape WTO discussions on e-commerce,” she said.

She said that the EIF was working on practical solutions in the mostly sub-Saharan countries where it operated and was also able to bring ideas from other least developed countries to bear in Africa – for example, an online potato market the EIF supports in Bhutan.

“We are not short of solutions, but now is the time to implement them at the practical level,” she said. “We must be innovative.”

New eTrade Readiness Assessments for Madagascar, Uganda and Zambia were launched at the meeting by Alessandro Vitale of UNCTAD. He sketched out the broad findings for representatives from each country who were present at the meeting.

“Uganda has made tremendous efforts in the region and we prioritize e-commerce in our national development plan,” Uganda’s minister for cooperatives Frederick Gume Ngobi said. His government was focused on agribusiness, tourism and updating skills, he said.

Noting signs of progress, he said Uganda had launched an e-trade portal to update people in business on formalization and other procedures and that rural electrification – a prerequisite for any digital progress – was making progress in Uganda.

Richard Randriamandranto, a special advisor to the prime minister of Madagascar, said introducing cheap trackable microchips in cattle might face resistance in a country such as Madagascar, but his government prioritized benefiting from this and other new technology.

“We are capable of having a revolution and leapfrogging forward,” he said, noting that the Rapid eTrade Readiness Assessment would greatly assist Madagascar to accelerate reforms.

Paul Mumba of Zambia’s ministry of commerce, trade and industry said he was happy to receive the Rapid eTrade Assessment which will help build a “robust” e-commerce future for his country.

“The government is working on enhancing the existing legal framework for e-commerce,” he said, including on updating cybercrime provisions. The goal was to guarantee the safety of electronic transactions, he said.

Street naming and house numbering schemes were advancing, and the Zambia post would be a key partner he said. Zambia would seek UNCTAD’s assistance in formulating the country’s e-commerce strategy, he said.

Speaking as a funder of UNCTAD’s work, Sweden’s ambassador to Kenya Anna Jardfelt said: “We believe that these assessments are an important baseline and diagnostic instrument.”

“Sweden is convinced that the digital revolution is opening opportunities for growth, job creation and achieving the Sustainable Development Goals, and e-commerce is an important part of this,” she said.

Ms. Jardfelt also said that Sweden’s experience could be shared with its partners, including promoting openness and transparency in developing public policy in the data age.

“Let me also emphasize the gender perspective,” she said.

Ms. Jardfelt said her government was committed to supporting developing and least developed countries to engage in the digital future, including through its Aid for Trade commitments.

“We must bridge the digital gender divide where in LDCs 30% fewer women than men are online. This is smart economics since investment in gender equality yields highest returns of all.”

Representatives from numerous African countries and e-commerce stakeholders spoke from the floor to add their voices to the debate.

The session, which was livestreamed on YouTube and Facebook, was co-organized by UNCTAD and Germany and moderated by Daniela Zehentner-Capell of the German Federal Ministry for Economic Cooperation and Development.