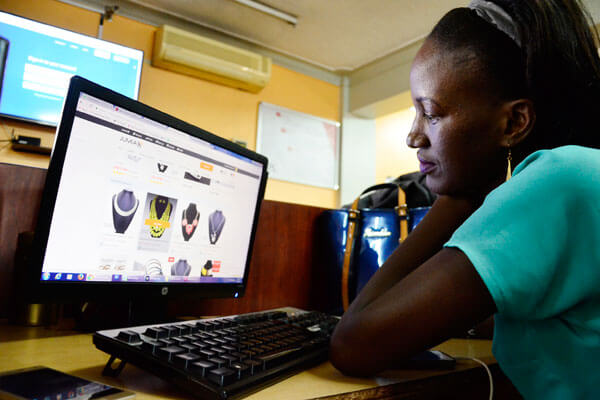 In order to ease doing business, Uganda has been advised to consider electronic commerce infrastructure.
This entails gearing government policies towards creating broadband access for both fixed and mobile communication to enable the Ugandan businesses be seen on the electronic market platforms.

To navigate around the challenge, the United Nations Conference on Trade and Development (UNCTAD) through German International Cooperation (GIZ) are going to secure financing over the next three months to carry out a rapid electronic trade preparedness study of Uganda.

This message was echoed by the UNCTAD secretary general, Dr Mukhisa Kitui, during his courtesy call at Uganda Coffee Development Authority (UCDA) last week.
UCDA is one of the government agencies signed up on the Uganda Electronic Single Window (UESW) platform, a system introduced by government to leverage technology to allow them submit all required regulatory documents electronically.

“The financing which is a grant will involve identifying the gaps in the government infrastructures, in training relations, local content development, regulation and privacy rules,” Mr Kitui said.
In Europe, 75 per cent of commerce is transacted electronically. In Africa, the best countries are Morocco, South Africa and Kenya but only rated between 5-6 per cent of transactions in electronic commerce.

Rated at 1 per cent, this means that Uganda has to do a vertical learning curve building not only the capacity but particularly assisting small businesses to get market feasibility as a way to the future.
Kitui added: “The development efficiencies of the payment system as issues of making it possible for Ugandan enterprises to be visible on electronic trading platform, which worldwide is the fastest component on which commercial transactions are done transacted electronically.”

“This means quality broadband and quality skilled and local content development, also quality domestication of how to reach the virtual markets,” he said.
Although he was tight-lipped on how much the financial assistance is, he said, it has been divided into two-different components. Paramount will be the second phase of (UESW), which is going to be announced by the government and then the rapid e-trade assessment, which will be announced by the minister of ICT after all the details with GIZ have been sorted.

About UESW
Last year, government started implementing the UESW project to allow importers and exporters submit regulatory documents such as permits, customs declarations and all regulatory documents using a single access point.
In order to make it work, all the relevant government agencies, economic operators and the private sector were required to come on board and as of December last year, 16 border intervening agencies had complied.

Some of the agencies, which have installed this system include Uganda Revenue Authority (URA), Uganda National Bureau of Standards (UNBS), Uganda Coffee Development Authority (UCDA), Ministry of Agriculture Animal Industry and Fisheries, Ministry of Trade, Industry and Cooperative and Uganda Export Promotions Board.

Experiences
Sharing the experience of using UESW-UCDA’s executive director, Dr Emmanuel Iyamulemye said the system came at a time when they were also developing an internal system for managing the data of the exports and generating documents.

“This eased our work to integrate with the Single Window and all this data that is collected through our system is used to generate the certificates,” he said.
Mr William Tobias Mutebi, the supervisor customs business analysis of URA, the implementing agency, said they started with coffee development as one of the institutions in the pilot phase which started in 2017 December

“UCDA came on board in November. We now have morethan 18,000 quality certificates in the UESW,” Mr Mutebi said.
According to UCDA, when they joined the system, complaints from the exporters reduced, time of issuance reduced and also the transporters are benefiting because by the time they get to the borders, they already have the information.

“As UCDA, it also improves information sharing because we are sharing information with URA,” he added.
Mr Michael Nuwagaba, the chief operations officer at Ugacof one of the exporting companies said: “The UESW has made export work easy because of its transparency and has no short-cuts which would otherwise delay transiting goods.”

He said previously there were a lot of uncertainties and the bureaucracy which was consuming a lot of time during business transactions has been eliminated.
“Because of this system, the quality department at UCDA is now operating well and this too, has eased operation,” Mr Nuwagaba said.

UESW benefits
Mr Edmund Kananura, UCDA’s quality and regulatory services director, said saving money and time are some of the benefits that came with this system.
“Remember nearly 80 per cent of the value of product at export is taken by the farmer. Then the traders, middlemen fight for the 20 per cent of the value at export. So, anything that streamlines and eases the export of coffee automatically benefits the whole value chain,” Mr Kananura said.

NEW SYSTEM
UCDA is one of the government agencies signed up on the Uganda Electronic Single Window (UESW) platform, a system introduced by government to leverage technology to allow them submit all required regulatory documents electronically.

MAKE IT TO WORK
Agencies. In order to make it work, all the relevant government agencies, economic operators and the private sector were required to come on board and as of December last year, 16 border intervening agencies had complied.