The space economy is booming. What benefits can it bring to Earth

The space race began as a competition between two superpowers, but there are now 90 nations operating in space.

Another change since man first landed on the moon in 1969 is that lower costs mean it’s not just governments that can afford to put rockets and satellites into the skies. A host of private-sector companies are now investing in space programmes, seeking everything from scientific advances to potentially lucrative business opportunities.

It’s estimated that there are now more than 10,000 firms and around 5,000 investors involved in the space industry.

The space economy is booming

The term “space economy” covers the “goods and services produced in space for use in space, such as mining the moon or asteroids for material”, according to the Harvard Business Review. The OECD defines it as any activity that involves “exploring, researching, understanding, managing, and utilizing space”.

The Space Foundation’s The Space Report 2022 estimates that the space economy was worth $469 billion in 2021 – a 9% increase from a year earlier. And over 1,000 spacecraft were put into orbit in the first six months of this year, the report says – more than were launched in the first 52 years of space exploration (1957-2009).

But the space sector is not only a growth sector in itself – it’s also proving a key enabler of growth and efficiency in other sectors. The European Space Agency says the deployment of new space infrastructure has brought benefits to industries including meteorology, energy, telecommunications, insurance, transport, maritime, aviation and urban development.

Most of this money came from the private sector rather than the public sector, the report says, estimating that more than $224 billion was generated from products and services delivered by space companies.

There has also been an increase in state-backed investment in space projects around the world, according to the Space Foundation report. There was a 19% jump in overall government spending on military and civilian space programmes last year. India raised spending by 36%, China invested 23% more and the US pumped another 18% into space ventures. 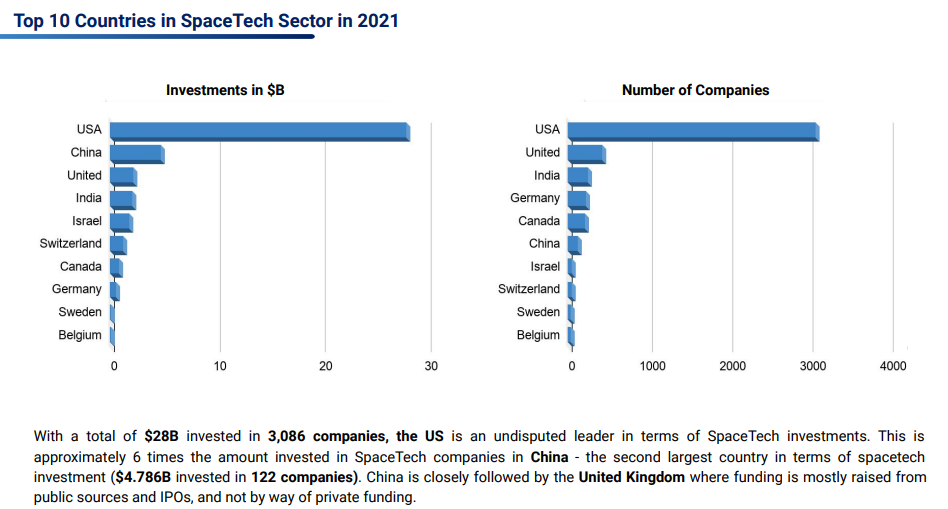 Innovation is fuelling the space economy

What’s happening today has been described as a “space renaissance” – a period when technological innovation is significantly reducing costs and creating new capabilities.

The CEO of Planet Labs, Will Marshall, told the World Economic Forum’s Annual Meeting at Davos in May that rocket prices have dropped fourfold in the past decade. Companies that might once have had to pay hundreds of thousands of dollars to put a satellite into space can now do so for a fraction of that, as cheaper components have become available.

Marshall says this means we’re now producing 10 times more Earth imagery by area than five years ago, and 10 times the bandwidth of communications is being transmitted around the planet.

He also says better imaging is increasing accountability. For example, commercial satellite data is providing a bird’s-eye view of the conflict in Ukraine, allowing the world to witness and record events on the ground as they occur.

However, the almost 9,000 tonnes of equipment that has headed into space is creating problems of its own. There are more than 100 million pieces of space debris – at a size of one millimetre or larger – orbiting the Earth, NASA says.

This debris can include non-functional spacecraft, abandoned equipment, and mission-related debris. Travelling at speeds up to 17,500 miles per hour (28,160 kilometres per hour), even a tiny piece of debris can damage a satellite or spacecraft.

NASA says that an average of one piece of debris has fallen back to earth each day over the past 50 years. However it says these mainly land in oceans or uninhabited regions, and no serious injury to people or significant damage to property has even been confirmed. 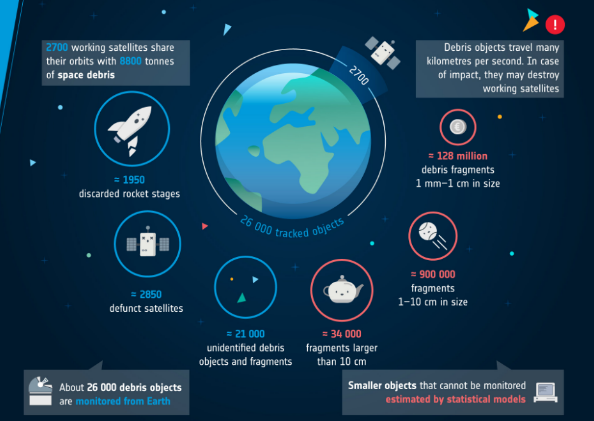 The World Economic Forum’s Space Sustainability Rating (SSR) looks to encourage responsible behaviour in space through increasing the transparency of organization’s debris mitigation efforts. The SSR will provide a score representing a mission’s sustainability in relation to debris mitigation and alignment with international guidelines.