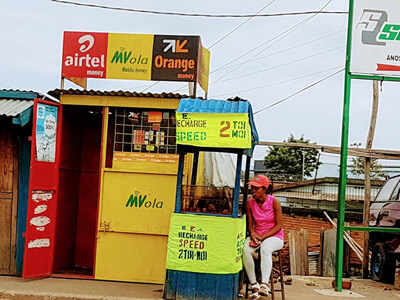 Madagascar calls on UNCTAD to assess its e-commerce readiness

Looking to boost electronic commerce on the “Big Island”, the government has asked UNCTAD to help evaluate the opportunities and obstacles for online business in the African nation.

Madagascar has asked UNCTAD to evaluate how well the country can do business online by carrying out a Rapid eTrade Readiness Assessment in the second half of 2018.

While global growth in offline trade has been stagnant for several years, online commerce has been booming, with sales jumping from $16 trillion in 2013 to an estimated $25 trillion in 2015. But this growth has occurred primarily in advanced economies like the United States, not in developing countries like Madagascar, where less than 5% of the population is on the internet.

E-commerce has started to take root in the Malagasy economy, but much work needs to be done before it becomes an engine of economic opportunity on the world’s fourth-largest island.

According to UNCTAD’s 2016 Business-to-Consumer E-commerce Index, Madagascar – lying 400 kilometres off the southeast coast of Africa – ranks 134 out of the 137 countries evaluated.

“E-commerce in Madagascar is still at an early stage. But the country needs to prepare to ensure that its companies are able to compete in the evolving digital economy,” said Torbjörn Fredriksson, in charge of UNCTAD’s ICT analysis section.

“The Rapid eTrade Readiness Assessment will help the government quickly identify the major opportunities and obstacles for online business on the island, and will propose concrete policy actions that are needed in key areas.”

Laws but no regulations

The official request, received on 7 March from the country’s ministry of trade and consumption, came as the result of a February workshop held by UNCTAD on the legal aspects of e-commerce for more than three dozen Malagasy magistrates and lawyers.

In 2014, Madagascar adopted laws on aspects of e-commerce – including electronic transactions, cybercrime, and privacy and data protection – but has yet to put in place the regulations to effectively enforce the legislation.

“For example, for data protection there is a law, but the government hasn’t set up a body – a data protection agency – to enforce the law,” UNCTAD legal expert Cécile Barayre said in an interview following this training.

“This leaves magistrates who are not specialized in e-commerce legislation trying to interpret and enforce things like data protection. It’s very challenging,” Ms. Barayre said, adding that the country still hasn’t adopted a law to protect consumers online.

As part of the training, participants were tasked with examining cases such as breaches of data, online fraud and determining how best to apply the country’s laws.

“The practical case studies gave us the opportunity to correct errors of interpretation for certain provisions of the texts,” said Rachelle Ravaomananirina, a magistrate working at the National School of Magistracy (Ecole Nationale de la Magistrature et des Greffes), where the training was held

“We gained a better understanding of the complexity of cases that deal with cybercrime issues,” Ms. Ravaomananirina said.

The hands-on training was organized with the World Bank, the Ministry of Trade and Consumption, the Ministry of Justice, and the Committee for e-Commerce Development of Madagascar. This training was a follow-up to an UNCTAD TrainForTrade online course on the country’s e-commerce laws held between April and June 2017.

To paint a full picture of the Malagasy e-commerce landscape, the eTrade readiness assessment will look beyond the legal and regulatory framework to also assess the following policy areas:

Part of UNCTAD’s eTrade for All programme readiness assessments are funded by the German and Swedish governments, and by the Enhanced Integrated Framework (EIF) – the global Aid for Trade programme designed specifically for least developed countries. So far, such assessments have been completed for Bhutan, Cambodia, Nepal and Samoa.

UNCTAD has been giving special attention to the needs of the “less developed among the developing countries” since its first ministerial conference in Geneva in 1964.