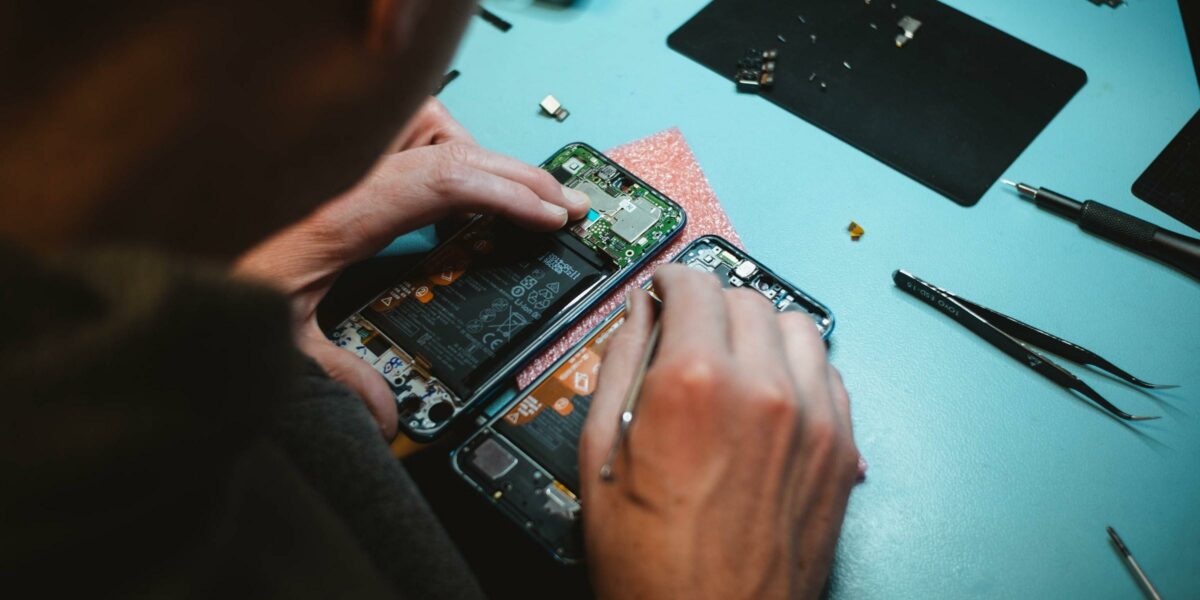 Industrialization challenges in the digital age

Left unaddressed, power asymmetries in the world economy can negatively impact industrialization in the Global South.

Since the dawn of the first industrial revolution, technological change has been a huge factor in making and shaping the world economy. The pace of change — both technological and economic — has been especially rapid since the onset of the ‘digital age’. The start of this age was characterized by the widespread use of digital computers and advances in information and communication technology in the late 20th century. The end of this age is far from over, as we are barely scratching the surface of the potential of new digital technologies in domains such as 3-D printing, advanced robotics, big data analytics, artificial intelligence and machine learning. Digital technologies and their commercialization have had, and continue to have, a huge impact on how economies develop and industrialize. Three questions in particular are shaping current debates about industrialization: 1) Are digital services emerging as an alternative to manufacturing-led development in the Global South? 2) Are digital automation technologies displacing manufacturing jobs in the Global South? 3) Does the expansion of digital and global value chains represent an obstacle to industrialization in the Global South? I address these three questions in a recent journal article published in Third World Quarterly.1 In short, I argue that the answers to questions 1 and 2 are ‘no’, and the answer to question 3 is ‘yes’. That is, power asymmetries in the world economy are a greater obstacle to industrialization in the Global South than technological change, in a direct and explicit sense. The long answer to these questions is slightly more complicated, and will be further  elaborated here.

A snapshot of countries’ national accounts around the world reveals that the size of the manufacturing sector is shrinking in nearly  every country (see figure below), and is being replaced by the service sector. Many services, especially digital ones, are now proving to be drivers of productivity growth. Take, for example, software-related services: fixed assets are costly (for example, server farms, cooling systems, secure sites and so on), just as is the case with manufacturing operations, but costs rapidly decrease with scale as the services are sold around the globe in a flash. In fact, the World Trade Organization finds that total-factor productivity growth of digital services between 2005 and 2015 has been higher than manufacturing in four of the world’s largest economies.2 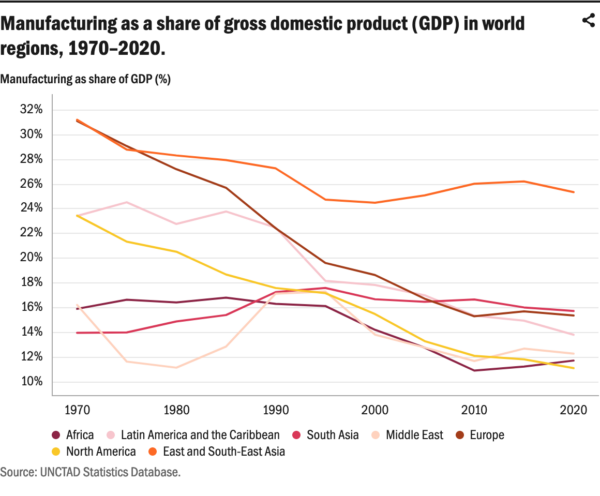 However, services have not yet reached the potential of manufacturing as a driver of economic development. Throughout the history of capitalism, nearly all economies that advanced from low- to high income succeeded in doing so by developing their manufacturing capabilities.3 And this does not seem to be changing: a recent study involving a sample of 63 countries between 1990 and 2011 found that manufacturing output growth stimulates both economic and productivity growth, particularly in developing countries.4 This is why countries that are struggling to develop a competitive manufacturing sector are also struggling to develop their economies.

Measurement issues also raise questions about the supposed increase of services as a share of economic output. The manufacturing sector’s value added and employment contribution to world GDP and employment, respectively, has actually not changed much since 1970. How do we reconcile this with the figure above? The answer is that the declining share of manufacturing in most of the world’s economies over the past few decades is simply a result of the relocation of manufacturing activities to a small number of economies, led by China.5 In other words, China is taking over most of the world’s manufacturing production, and has become the world’s factory, so-to-speak. We should also question whether manufacturing-related services, such as research and development (R&D), industrial design and product testing – all of which require engineering know-how – should even be counted as services, which they currently are in most countries’ industrial classification systems.6

Why digital automation technologies will not supplant most manufacturing jobs

There are growing fears that new automation technologies will start displacing jobs at a faster rate than they have in the past, and many scholars highlight that manufacturing jobs (or job creation in the manufacturing sector) in the Global South are particularly at risk.7

If we look at forecast studies that predict the impact of automation on employment in the future, the first and most important thing to note is that their estimates vary widely (see figure below for a compilation of key studies). Some of these studies also caution against extrapolating from automatability to unemployment or job displacement, because automation technology has the potential of creating jobs, not only to displace them. This is attributable to a number of related reasons: 1) technological advancement is associated with productivity growth, which in turn is associated with job growth; 2) new technologies give rise to new industries and new jobs; 3) the use of automation technologies can drive down the price of consumer goods or give rise to a larger variety of consumer goods. So, although automation technology has caused and will continue to cause labour displacement and workforce disruptions in the future, there is good reason to be optimistic about its net impact on employment. A good case in point is a recent study by McKinsey, which calculated that the PC created 15.8 million more jobs in the United States than it displaced between 1980 and 2015.8

Technological advancement is associated with productivity growth, which in turn is associated with job growth.
Since the late 20th century, production processes have become increasingly globally fragmented, borderless and interconnected, giving rise to the concept of global value chains.

Another reason why digital automation technologies will not cause large-scale job displacement is that it is simply not commercially viable to roll out all of these technologies, especially in the Global South. A recent report by the UN Conference for Trade and Development finds that most existing studies overestimate the potential adverse employment effects of automation technology, because they neglect to take into account that what is technically feasible is not always also economically profitable.9 A number of additional barriers to implementing automation technologies exist in the Global South, such as a lack of trained maintenance staff, lack of access to capital, and unreliable energy infrastructure.10 A counterargument to this point is that jobs lost in the Global South due to automation will occur mostly because of ‘reshoring’. This refers to a process whereby high-income countries ‘withdraw’ previously offshored production because of the availability of new automation technologies in their own countries. However, while evidence shows that reshoring does occur, it does so on a small scale, often on a smaller scale than new offshoring activity.11

Since the late 20th century, production processes have become increasingly globally fragmented, borderless and interconnected, giving rise to the concept of global value chains. The expansion of global value chains is the result of many factors, including lower trade barriers and reduced transport costs. But rapid advances in digital technology is arguably the most important one, and many value chains today are centred around digital technology.

The expansion of global value chains has both positive and negative impacts on industrialization in the Global South. Among the positives are the benefits of integrating into the world economy through more trade and inflows of foreign direct investment. China is a very good example of a country that has reaped the benefits of this opportunity. Yet the expansion of global value chains12 is accompanied by some negative aspects, for example, it has enabled a small number of large transnational corporations—mostly based in the Global North—to consolidate increasing shares of profits over a larger market.13 This consolidation is fortified by technological dominance, strong protection of intellectual property rights, low trade barriers and privileged access to low-cost capital and labour all over the world.14

The iPhone value chain is a telling example of the unequal distribution of value in a major global industry. In the figure below, I have calculated the average distribution of value for iPhones released between 2010 and 2018. The figure is nothing short of shocking. Throughout practically every new iPhone release, Apple has been raking in 56% of the final retail price (on average) without actually producing or assembling any of the components; 1.5% of the final retail price goes to the most labour-intensive part of the production stage – assembly – mostly carried out in China. This value squeeze on labour also explains the dire working conditions in the global electronics industry and most other global manufacturing industries, evidenced by wages below the social reproduction wage, excessive overtime work and damaging health conditions.15 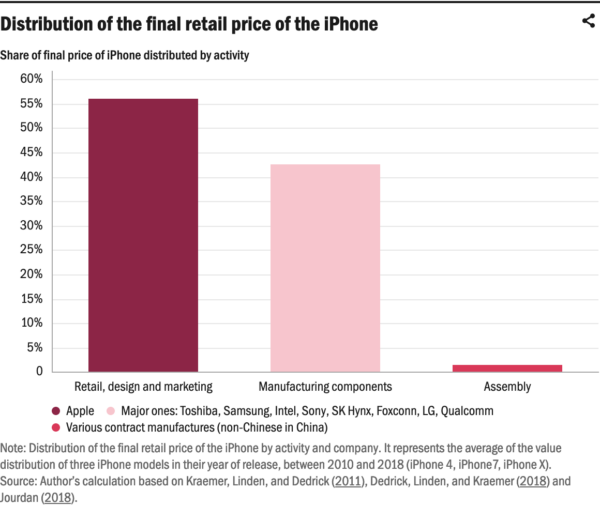 I could highlight a range of policies to take advantage of the opportunities and address the challenges discussed so far. Power asymmetries in the world economy are one of the most pertinent issues, so I will focus on the following two aspects: 1) how developing countries can avoid becoming prey to the strategies of transnational corporations, and 2) levelling the playing field in the world economy.

We also need to level the playing field in the world economy. This implies that we need to look beyond the realm of domestic industrial policy and at that of international politics, and investigate, in particular, the practices of international organizations that have the power to set industrial and trade policies and regulations. The World Trade Organization is an important institution in this respect, and has come under fire for years for protecting the technologies of transnational corporations headquartered in the Global North and for limiting the ‘policy space’ countries in the Global South have to transfer technology from foreign firms to the domestic economy and to nurture domestic industries.17 This means that we need to appeal to international organizations, like the World Trade Organization, to allow more room for countries in the Global South to implement strategic trade and industrial policies.