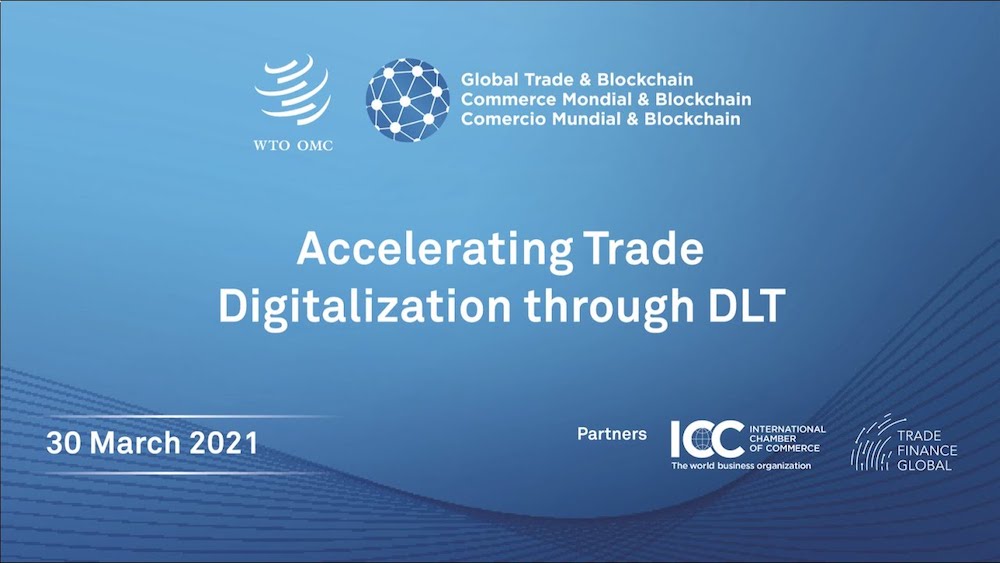 It is my great pleasure to welcome you to the second edition of the WTO Global Trade & Blockchain Forum. Let me begin by thanking our Economic Research and Statistics Division for having put this event together.

A lot has happened since the first Forum we held in December 2019. The Covid-19 pandemic has shaken the world, causing massive supply chain disruptions and threatening the lives and livelihoods of millions of people.

It has exposed supply chain inefficiencies, and the record seizures of faulty and counterfeit masks and other personal protective equipment in the US, Australia and other places have highlighted the vulnerability of the medical device supply chain and the need for greater integrity and provenance of medical supplies and other critical products.

The pandemic has also brought to the fore the archaism of trade processes still largely based on paper, with dire consequences on business operations in times of lockdowns. It has brought into sharp focus the need to urgently digitalize these outdated paper-based processes. The last twelve months have shown that going digital is no longer optional. It is a matter of survival for many companies, in particular the smallest ones who have been hit very hard by the current crisis.

So how can we bring trade digitalization to its next level? In spite of all the efforts made over the last decades, the adoption of electronic bills of lading – which is a key document in international trade – remains ridiculously low, at 0.1%.

How can we accelerate trade digitalization to build back better? Can advanced technologies, in particular distributed ledger technology – commonly referred to as blockchain – help to address the risks and inefficiencies in global supply chains and strengthen trade resilience?

Today’s event will dive into these issues. It will explore how technology, in particular distributed ledger technology, can be leveraged to enhance transparency and efficiency of supply chains and trade processes. It will discuss latest blockchain developments in trade and trade finance and how trade digitalization can be accelerated to the benefit of all, developed and developing economies, large and small companies. It will also provide an opportunity to explore the importance of digital identity for trade digitalization, a topic that is starting to emerge – although still timidly – in trade discussions.

But we all know that technology is only a tool and that trade digitalization cannot happen in a regulatory vacuum. Today’s final session will discuss the role that governments and international organizations can play to support the development of a regulatory and policy framework conducive to trade digitalization and to the deployment of distributed ledger technology.

Today’s Forum brings together a broad range of actors – trade officials and policy makers, as well as CEOs and senior officials of large and small companies, tech companies, and business associations – in an attempt to foster discussions on these issues at a cross-sectoral level with the wider community.

I’m delighted that we have with us today two keynote speakers who will share their vision of blockchain for trade. First, Mr John Denton, Secretary General of the International Chamber of Commerce. The ICC has been pushing the trade digitalization agenda very actively and recently launched a new initiative, the ICC Digital Standards Initiative (DSI) which aims at addressing the digital island problem – the fact that many of the projects that are being developed follow a siloed and disconnected approach leading to fragmentation between systems and networks that prevents end-to-end trade digitalization.

I would like to thank the ICC for having extended an invitation to the WTO to participate in the governing board of this initiative to advance trade digitalization work at a practical level in a public-private cooperation spirit. Having all stakeholders involved in this work is critical.

Our second keynote speaker is Mr. Lew Chuen Hong who is CEO of the Infocomm Media Development Authority of Singapore. Singapore has been spearheading work on blockchain for trade. Mr. Lew Chuen Hong will share with us some of the initiatives they’ve been working on to promote trade digitalization.

We’re all acutely aware of the challenges that MSMEs face in accessing financing. The MSME financing gap is a reality that cannot be ignored and that needs to be tackled with determination if we wish to ensure that small players are given a chance to thrive. Indeed, for many micro, small and medium-sized enterprises around the world today, access to financing can mean the difference between prosperity and bankruptcy.

Based on a survey of 105 practitioners in the field and more than 30 qualitative interviews, this publication aims to shed light on the opportunities that technology opens to make MSMEs’ access to finance, including trade finance, more accessible. It discusses the challenges standing on the path to adoption and outlines a multi-pronged approach to unleash the potential of digital technologies to facilitate MSME financing.

We’re also announcing today the launch of an online introduction course on blockchain for trade developed jointly with the International Trade Center. I would like to extend my sincere thanks to the ITC team for their support and help in producing this course.

The course, which will be officially launched in the coming weeks, appeals to technical and non-technical audiences alike and will be freely accessible through both the ITC SME Trade Academy and WTO E-learning platforms. It contains four modules (Why blockchain?; What is blockchain technology?; How can blockchain be used in international trade?; and Implementing blockchain for trade).

The lectures have a particular MSME focus. They examine the opportunities that blockchain technology may create for small producers and enterprises, especially those located in developing countries. Session 3 of today’s Forum will give you the opportunity to learn more about the content of this course and how you can register to take it.

I hope that today’s discussions will provide useful insights and food for thought on the issue of trade digitalization and that the ideas that emerge will help guide Members’ thinking and actions going forward.

We have a fantastic set of speakers with us, so I have no doubt that it will be a very productive event. Enjoy the discussions!

Thank you for listening.