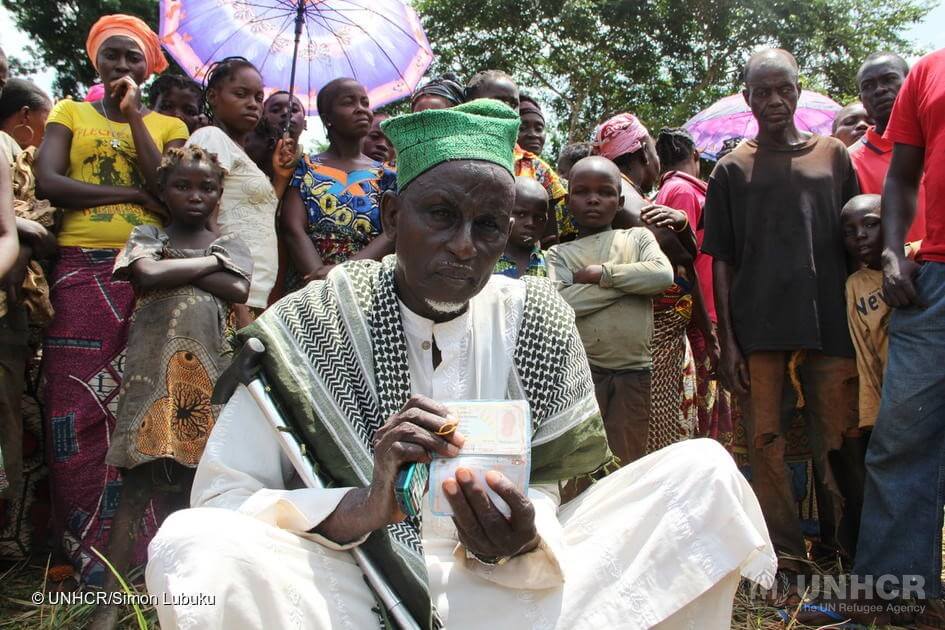 Oria Adamo, 72 years old and the mayor of a small town in Central African Republic shows his ID card in the village of Ndu, Bas Uele province,
Democratic Republic of the Congo where thousands fled after fleeing a surge in violence that began in May 2017. © Simon Lubuku/UNHCR

Fardowsa, a 20-year old Somali refugee in Uganda, knows the vital importance of identity documents to refugees. She and her family were forced to flee her homeland in 2001 without any official documentation. The refugee ID card she was issued by the Government of Uganda not only provides her with protection and access to humanitarian assistance, but it has also given her the opportunity to study at university and open a mobile money account. With this foundation, Fardowsa is planning to start her own business to further improve her and her family’s new life. In the process, she will also be contributing to Uganda’s economy while realizing her potential as a young female refugee.

Identification is also crucial for internally displaced persons (IDPs), who have been forced to flee their homes to other areas within their own country. During a recent participatory assessment conducted by the UN Refugee Agency (UNHCR) in Diffa, Niger, Mohammed, an internally displaced man, emphasized: “having an identification document makes life more dignified. The community respects you and knows you are somebody”. His ID helps him pass through security checkpoints in the conflict-affected area where he lives, allowing him to continue in his business. Having an ID also facilitates social participation for many IDPs and can contribute to addressing gender-based issues and other risks of marginalization.

Advances in digital technology and the introduction of ID systems by governments around the world are resulting in new approaches to providing IDs to forcibly displaced persons.

In past situations of mass influxes, receiving governments would often request UNHCR to undertake refugee registration and documentation on their behalf. But host countries are now taking an increased role even during the first phases of a crisis, often in partnership with UNHCR, using shared identity management tools and registration processes. In some countries, refugees are now being included in the host country’s national population registry or ID system, which means they are issued a Unique Identity Number (UIN) and their life events are being recorded in the civil registry – something that used to be accessible only to citizens.

Key drivers of this trend include the commitment by all countries, as part of the Sustainable Development Goals (SDGs), to “provide legal identity for all, including birth registration” by 2030 (target 16.9) and the 2016 New York Declaration for Refugees and Migrants. Regional civil registration and vital statistics (CRVS) initiatives in Africa and in Asia and the Pacific  have also shone a light on the importance of host States registering the births of refugees, IDPs and stateless persons, to protect child rights.

Past research by the World Bank has shown the potentially transformative impacts of proper identification for the inclusion of refugees in local communities and economies. The use of digitally-enabled IDs that are interoperable across different aid agencies can greatly enhance the efficiency of humanitarian assistance delivery.

Importantly, the provision of IDs that are officially recognized will facilitate the financial inclusion of refugees by, for example, allowing them to register SIM cards in their own name and to open mobile money or bank accounts. Host communities will also benefit from the extension of coverage of ID systems across the whole country, including hard-to-reach and border areas.

But there are also risks that need to be managed. The collection and use of personal data is a great responsibility. It must be done in such a way that protects against misuse or unauthorized disclosure, and ensures that the individual’s right to privacy is respected. UNHCR’s data protection policy recognizes that the stakes are even higher for refugees, requiring additional considerations. To address these risks, governments should adopt and implement strong legal and regulatory frameworks for data protection, ensure that they are collecting and using personal data with the informed consent of the data subjects, and capture and process only the minimum data needed for the purposes of an ID system.

UNCHR and the World Bank’s collaboration on Identification

UNHCR and the World Bank share the goal of ensuring that the voices and needs of the forcibly displaced and host communities are considered in the design and implementation of robust, inclusive, and responsive ID systems.

This is a central feature of the 10 Principles on ID for Sustainable Developmentthat both organizations have endorsed, along with over 20 other international, philanthropic, academic, and private sector organizations.

To implement UNHCR’s Digital Identity and Inclusion Strategy, consultations are being held with forcibly displaced persons and host communities to understand how to develop digital ID systems that best meet their needs. This work is based on UNHCR’s existing participatory approaches and also supports efforts to issue documentation to refugee men and women on an equal basis.

Similarly, the World Bank is working to ensure that projects to support ID systems in client countries reflect the experiences and needs of the population, and that they leave no one behind—particularly the poorest and most vulnerable groups such as refugees and IDPs.

To make this happen, it is critical to keep local stakeholders engaged throughout the process, and to create channels for people to actively provide feedback on their experiences getting and using IDs, including through grievance redress mechanisms.

As part of their wider partnership, UNHCR and the World Bank will work together to develop practical tools that a wide range of stakeholders can use to consult with refugees, IDPs, people at risk of statelessness, and host communities in the design and implementation of ID systems.

Listening to their voices is crucial to ensuring that their ID needs are met and their protection enhanced. This will complement other collaboration such as joint work in countries where governments are seeking to include refugees and IDPs in ID systems, guidance on key privacy and data protection safeguards for refugees in ID systems, as well as an upcoming report on existing and emerging models across the world for providing digital IDs to refugees.