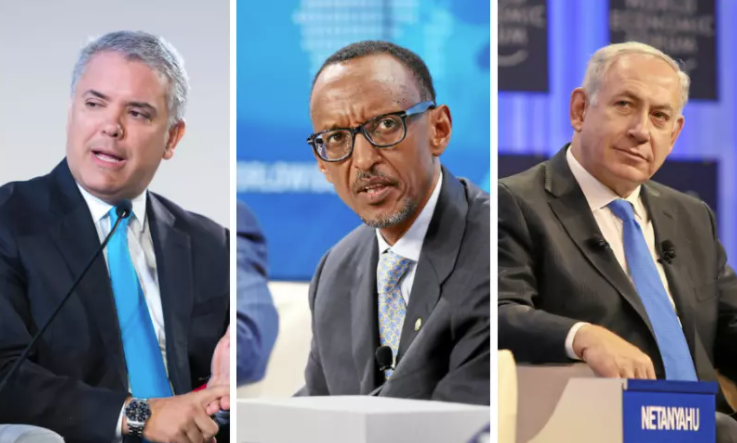 Duque, Kagame and Netanyahu: How to harness digital tech after the pandemic

All three highlighted the importance of education in preparing for the Fourth Industrial Revolution.

“There are so many problems that technology can provide solutions for. And that’s why we’ve prioritized investments in technology and infrastructure.” These were the words of Rwandan President Paul Kagame in a virtual session, The Great Reset: Harnessing the Fourth Industrial Revolution, which brought together three heads of state along with leaders from academia, biotech and finance to discuss the role digital technology will play in the COVID recovery.

Studies have shown that the world leaped forward five years in digital uptake during the early days of the pandemic. AI is projected to increase global GDP by about 15% in this decade alone, while 5G is also expected to generate $13 trillion in global economic value and 22 million jobs by 2035.

Technology is clearly key to the recovery and our ongoing resilience – but there are also challenges to be faced. Many industries, built for an analogue era, are still playing digital catch-up. Meanwhile there is a real risk that the pandemic will deepen the digital divide, with close to half the world’s population still not connected to the internet.

To unlock a sustainable future, we need the right digital-enabling policies in place. Here’s how the three leaders are facing up to the Fourth Industrial Revolution.

“Colombia will be working very hard to meet the goal of being conceived as a Silicon Valley in Latin America, and a start-up nation,” says the country’s President Iván Duque, citing the OECD Digital Government Index, in which Colombia was ranked third this year.

But central to this digital transformation is equality, adds Duque, and a social pact that aims to bridge the digital divide.

“It starts with connectivity,” he says. “Our goal is to have 70% of all the Colombian population with high-speed internet by the end of my administration in August 2022.”

The Latin American nation also aims to train 100,000 programmers, and to expand digital penetration into education, land registry and tax collection, while 10,000 additional areas of the country are being brought high-speed internet “to expand services for the poorest of the poor”.

There has been an acceleration of digital literacy across Colombia, from fintech to e-commerce and telemedicine. For the country’s young people, this acceleration has proceeded at “double” the pace. Duque explains that this has been brought on by demand for new skills among international companies.

“Kids that are graduating from high school will have on the one hand their high school diploma, and on the other hand a degree as a technician so that they can start in the labour force.”

In Africa, it’s about working together
– Paul Kagame

“Rwanda has continued to prioritize investment in technology, broadband and digital skills, but we’re aware that it’s going to succeed [only] in the wider context of our continent, which in many cases has been left behind,” says Paul Kagame, the President of Rwanda. “We have had this vision where not only do we develop these capacities not only within our own country but across the continent.”

For this “pan-African” approach to function, systems must be capable of communicating across borders. “We’re aware that technology innovation is moving fast, and this puts pressure on regulators to find the right balance,” Kagame explains. “We don’t want this to happen in one country and not another. It affects how we work together, especially in context of the new continental free-trade area, created across Africa, which by any measure seems to be the largest in the world.”

Like Colombia, Rwanda has established a Centre for the Fourth Industrial Revolution to foster public-private collaboration. “We continue to build on that for deeper partnerships with the private sector,” Kagame explains. “The private sector is very crucial in creating jobs, in making sure they bring the necessary investments in creating the jobs required for our young people.”

Designing the right education for young people is a key investment for the future. “Most children entering primary school today will work in jobs that don’t yet exist, so the curriculum has to be flexible and future-oriented, with technology skills as a priority,” says Kagame.

He says government must prioritize investments in infrastructure and skills, but also in how Africans communicate across the continent. “We will invest not only in tech innovations but in technical and vocational education. This needs to be more widely available, especially because of these big numbers of young people.”

The world has changed. Can we keep up?
– Benjamin Netanyahu

Israel has been battling extremely high COVID infection rates, and in September had to impose a general lockdown right at the start of the school year.

“What do we do with the schools?” says Benjamin Netanyahu, the Israeli Prime Minister. “How do we open them up? And the reason that’s an acute question is not merely because of the virus but because of the digital divide. Because if you don’t want to open them up and you use e-learning, what about those who don’t have e-learning?” A lack of digital access is prevalent in Israel’s Orthodox Jewish and Arab communities.

The first focus, then, had to be on infrastructure. The government allocated resources to buy computers for deprived children, and established a fund to stretch fibreoptic technology to all parts of Israel. “Even though we have a tiny country, we have central places where the 5G companies will go and other remote areas where they won’t go because it’s not profitable for them,” says Netanyahu. In this way, they could ensure “every girl and boy, every teenager and every university student can have these capabilities”.

The second priority is on human resources to staff the tech space of the future. Thanks to a deliberate drive, the number of IT students in the country’s universities has grown 70%. Far from deepening the digital divide, says Netanyahu, this is boosting the number of IT educators for the future, as well as the number of tech workers for the nation’s booming start-up scene. Israel’s R&D spending per capita is already the highest in the world.

Its important for the country to maintain its focus on excellence, says Netanyahu. “Don’t try to erase the digital divide by lowering the top. You can raise the bottom but if you lower the top you get nothing.”

As a third focus, the country is updating regulation to bring it into line with the new normal. “Our economies and our educational systems, our social systems are geared to yesterday. We have to gear them towards tomorrow.” To this end, Israel is specifically looking to change regulations on driverless cars and drones.

The fourth key, Netanyahu says, is international co-operation – especially in the context of the COVID-19 vaccine. Israel enjoys partnerships in Latin America and Africa, as well as with Australia, Singapore and Britain. “These co-operations are very valuable.”

A new co-operation that is “giving enormous hope to everyone here” is with the Arab world. “We have just signed peace agreements with the United Arab Emirates; we’re signing peace agreements now with Bahrain.” These agreements include the sharing of technology in the coronavirus fight and beyond.

Finally, Israel is looking to ensuring its cyber-defence systems are watertight. “The more we have a dependence on these [digital] systems, the more we need to protect them.”

“I think the world has already changed,” says Netanyahu. “The only question is how fast do we change.”