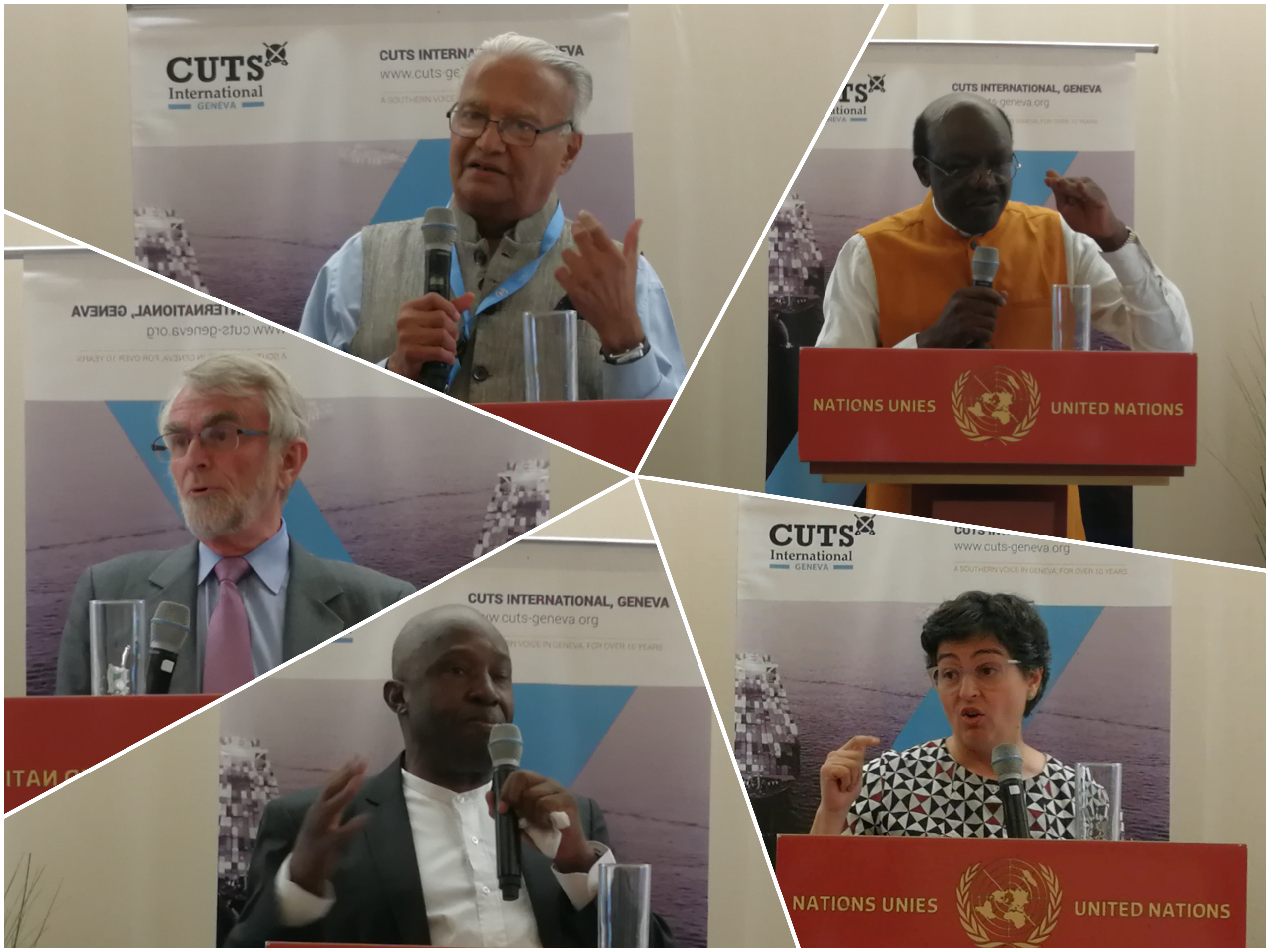 “The beauty of our work is that we have been able to cross-fertilize among our centres. We practice South-South cooperation, not just preach it.”, said Pradeep S. Mehta, Secretary General of CUTS International welcoming the crowd gathered at a reception to celebrate the 10th Anniversary of CUTS’ presence in Geneva.

For over a decade, CUTS has made a name for linking people and issues in the world of trade with their counterparts in related policy areas, progressively taking on issues such as agriculture, environment, investment, competition policy, consumer protection and e-commerce. “CUTS joined UNCTAD’s eTrade for All for it understood that the digital economy is becoming a new front for competition. As an institution, you have to evolve or become irrelevant, and this is what I celebrate as you complete 10 years in Geneva,“ said Mukhisa Kituyi, Secretary General of UNCTAD in his remarks.

Since established in 2008, CUTS International Geneva has become a credible southern NGO voice on trade and development-related issues in international policy circles, and a prime interlocutor of developing countries and international organisations in Geneva. “CUTS has been hugely important in promoting reforms that have let to better competition, trade and consumer protection,” said Frederic Jenny, Chairman, OECD Committee on Competition.

This was echoed by Arancha González, Executive Director of ITC, who praised the consistent far-sightedness of CUTS’ founder.“Thirty years ago, Pradeep was already pushing for competition which nobody knew about; consumer protection which nobody cared about; and open markets which everybody was fighting against. Today, these are at the centre of the economy. I call this being a man of avant-garde,” she said.

By providing expertise across WTO issues, from traditional ones like agriculture to more recent debates on e-commerce, MSMEs, gender and investment facilitation, CUTS has been a tireless support to developing countries and LDCs in Geneva. “CUTS has been of significant help to many developing country delegations in Geneva.”, acknowledged Yonov Frederick Agah, Deputy Director-General of the WTO, also recalling the NGO’s recent support for developing countries’ better participation in the trade body’s regular work.

Ratnakar Adhikari, Executive Director, Enhanced Integrated Framework (EIF), highlighted the importance of CUTS’ role in bridging the gaps between Geneva and capitals, while helping developing countries and LDCs better take advantage of trade. “CUTS is filling 3 important gaps for the southern world: knowledge, capacity and bringing the voice of people at the grassroots to international debates,” he said.

Thanking partners for their consistent trust and support, CUTS International Geneva’s General Assembly Chairman, Philippe Brusick, and Executive Director Rashid S. Kaukab looked forward to many more years of successful collaboration in pursuit of economic equity and social justice, within and across borders.

CUTS International Geneva is a centre of CUTS International, Jaipur which has completed 35 glorious years. Since its humble beginnings in 1983 as a local consumer advocacy group in India, CUTS has grown into an international think- and action- tank empowering people and institutions of the developing world across the economic policy landscape. With offices in India, Kenya, Zambia, Vietnam, Ghana, Geneva and Washington, CUTS’ family of organizations has made its footprints in the realm of economic governance, nurturing strategic alliances and partnerships in over 50 countries.