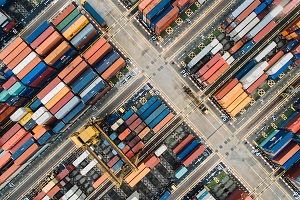 UN member States are moving towards more seamless and efficient trading environments, within and beyond their national borders. In general, countries across the globe have made the formalities in international trading simpler and increasingly digital or electronic.

The key preliminary findings of the Third UN Global Survey on Digital and Sustainable Trade Facilitation 2019 were released by UNECE and its sister United Nations Regional Commissions at the WTO Headquarters on 4 July during the World Trade Organization (WTO) Aid for Trade Global Review 2019.

The Survey, covering 126 countries, shows an increase of 6 percentage points from an average of 57% to 63% in global average implementation rate of trade facilitation and paperless trade measures since the last Survey in 2017. Developed economies, most of which are located in the UNECE region, have the highest implementation rate (around 80%), while Pacific Islands have the lowest (around 36%).

In the UNECE region, the average implementation rate is above the global average, reaching 72%, marking a 5-percentage point increase since 2017. The survey for the region, covering a total of 42 member States, shows improvement in all categories of measures. Two of the most implemented measures are Stakeholders’ consultation on new draft regulations, while two of the least implemented are Electronic application and issuance of Preferential Certificate of Origin and Separation of Release from final determination of customs duties, taxes, fees and charges.

According to the Survey, the measures included in the WTO Trade Facilitation Agreement have been generally well implemented by countries surveyed since their implementation in 2017. However, measures related to cross-border paperless trade implementation remains low compared other groups of measures, as do measures related to specific sectors and disadvantaged groups such as SMEs and women. Substantial effort is required to fully implement cross-border paperless, and to customize trade facilitation measures for SMEs and women.

The global and regional reports including detailed data analysis, will be published later this year. The results will also be made available on the online platform untfsurvey.org during summer 2019.

Over 570 UN/CEFACT standards and 40 recommendations on trade facilitation and electronic business developed at UNECE help countries and companies cut trading costs, reduce bureaucracy and implement the WTO Trade Facilitation Agreement. Enabling the accelerated digitalization of tools and procedures is a key dimension of this work.

Details of the event “Digital and Sustainable Trade Facilitation for Trade Diversification and Inclusive Development”, jointly organized by UNECE and its counterpart UN Regional Commissions (UNRCs) ECA, ECLAC, UNESCAP and UNESCWA, at the WTO Aid4Trade Global Review 2019, including presentations, are available here.

The event was organized under the UN Regional Commissions’ Joint Approach to Trade Facilitation. More information about the Approach is available here.