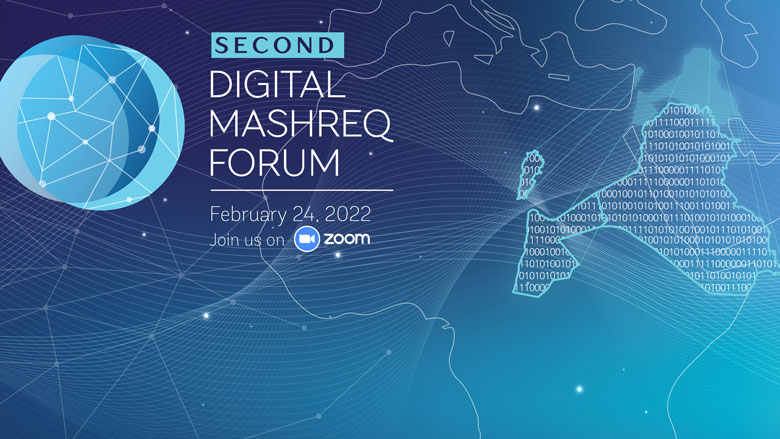 The World Bank Group, in partnership with the Governments of Iraq, Jordan and Lebanon, is organizing the Second Digital Mashreq Forum on February 24, 2022.

The Forum will bring together governmental partners and private sector representatives from Iraq, Jordan and Lebanon, as well as investors and executives from international and regional businesses.

Due to the COVID-19 pandemic, the Forum will take place virtually over Zoom. The event will be open to the media, and simultaneous interpretation (English/Arabic) will be available.

In February 2021, the World Bank Group organized a high-level ministerial round table on the digital economy in the Mashreq region. The round table gathered government officials from Iraq, Jordan, and Lebanon, as well as World Bank Group executives, to follow up on concrete commitments outlined by the three governments during the first Digital Mashreq Forum held in June 2019 in Amman. The round table discussions underscored the need for closer collaboration and dialogue between the public and private sectors, and for the adoption of digital applications that are relevant to national socioeconomic priorities.

In June 2021, the World Bank Group partnered with the Iraqi, Jordanian, and Lebanese governments to organize three national workshops on the digital economy. These virtual workshops came on the heels of the round table, and they engaged hundreds of attendees in a series of discussions on digital transformation as the pathway to economic growth, diversification, and closer government-to-citizen interaction. The workshops’ technical focus strengthened collaboration between each country’s public- and private-sector stakeholders, enabling them to identify common ground, refine their priorities, and move from strategy to implementation.

Building on the momentum of the ministerial round table and the national workshops, the second Digital Mashreq Forum will: