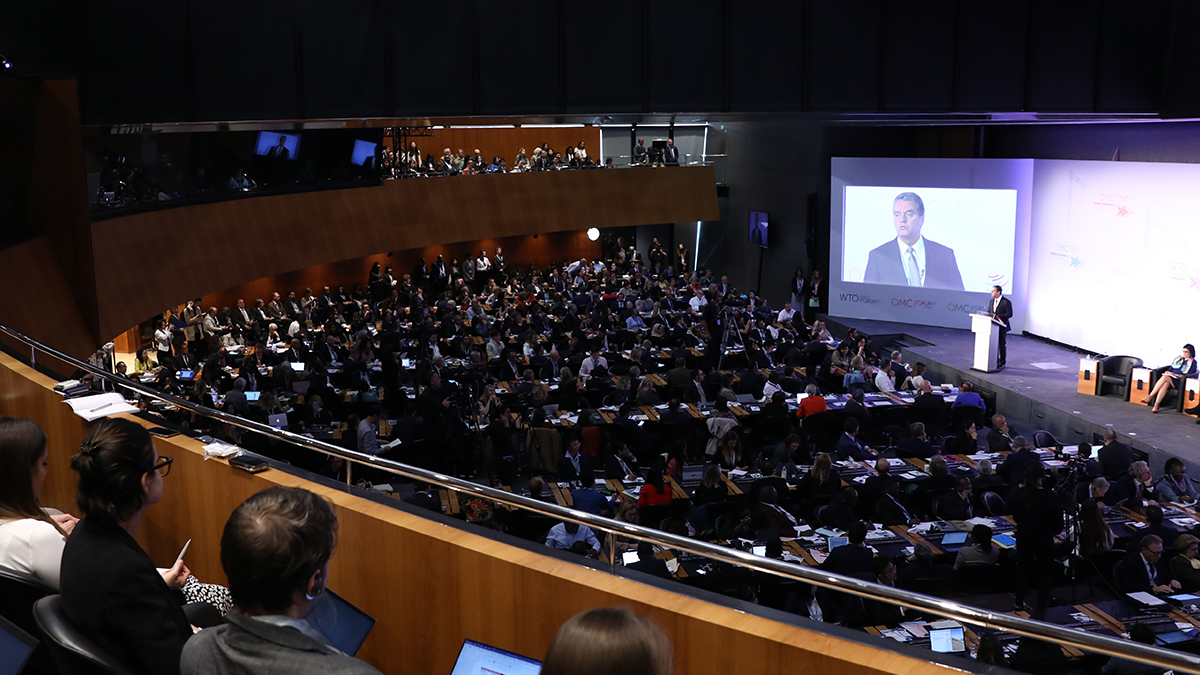 In his welcome remarks to the Opening Plenary of the 2019 Public Forum on 8 October, WTO Director-General Roberto Azevêdo underscored the need to adapt to a rapidly-changing global trading environment. The DG’s remarks kicked off three days of discussions and debate at the WTO regarding the future of trade and how to make it more sustainable and inclusive.

The Public Forum is the WTO’s largest annual outreach event, providing a unique platform for parliamentarians, leading global business people, students, academics and non-governmental organizations to come together and debate on a wide range of WTO issues and on some of the major trade and development topics of the day.

DG Azevêdo noted that 3,200 participants registered to attend this year’s Forum, a 30 per cent increase over last year, with 140 sessions scheduled over the four days of the event — an all-time record.

“The enthusiasm has been reassuring,” he told the Opening Plenary. “It means we’re asking the right questions — and that we are working together to find answers.”

The Forum’s high-level sessions are looking at how countries, businesses and traders can best prepare and adapt to a changing world, what Millennials and Generation Z expect from global trade, the increasing importance of services in global trade, and how the WTO can respond to a rapidly changing world. The Forum will also include the launch of the 2019 edition of the World Trade Report entitled “The Future of Trade in Services”.

Keynote speakers at the Opening Plenary addressed these central themes along with others, most notably the importance of a rules-based multilateral trading system in a time of uncertainty and how to ensure that global trading rules work in sync with environmental policies to ensure that trade contributes positively to sustainable development.

DG Azevêdo kicked off the discussions by stressing the need for all participants in global trade — including the WTO — to recognize and adapt to a trading environment that is undergoing rapid technological change.

“We need to change because technology advances, more services become tradeable, and rising generations join the workforce,” he declared. “But of course, some things remain constant. People still want decent jobs. They want a sense of security about their own prospects, and those of their children.”

“New technologies have the potential to expand human capabilities and enable inclusive prosperity,” DG Azevêdo continued. “Or, they could fuel unemployment, inequality, and years of instability and unrest. The future we get will be shaped by the policies we choose, at the domestic and international levels.

“Our ongoing discussions on WTO reform are part of this response. They offer members an opportunity to cooperatively define positive-sum rules for the 21st century economy.” His full remarks are available here.

Jeffrey Sachs, Director for the Center for Sustainable Development at Columbia University, said the importance of the multilateral trading system is underlined by looking back at the history of the Great Depression in the 1930s, when a wave of protectionist measures contributed to events leading to “one of the biggest disasters in world history,” the outbreak of the Second World War.

“We have a big job to do to protect the WTO and protect the world trading system,” he said.  “We depend on it, we thrive from it, we’ve had the longest period of global growth because of it (and) it’s vital for peace … Holding together in a multilateral system is our biggest challenge we face now, and the vast majority of the world agrees with that.”

But for the system to continue thriving, governments need to address the domestic income inequalities that trade can exacerbate absent effective government policies, Sachs argued. Equally important is for the multilateral trading system to sync with international efforts to address climate change and preserve biodiversity in order to ensure trade is supportive of sustainable development. “That system coherence has yet to be built,” he argued.

Tina Fordham, Director and Chief Global Political Analyst with the financial firm Citi, said multilateral trade rules “are like a house, you take it for granted until it collapses. The rules underpinned an era not only of prosperity but of peace.”

Nevertheless, she warned, political turbulence “is here to stay for some time”.  Such turbulence is not necessarily a bad thing because it can bring about change for the better, including more sustainable and inclusive strategies. But the push to improve social safety nets to address future challenges such as the impact of automation on employment was only likely to become an imperative if white collar workers start losing their jobs to technological change.

Melanie Kreis, Chief Financial Officer for Deutsche Post DHL Group, highlighted the important changes to trade brought about with the rise of electronic commerce, which represents a “big opportunity to make trade more inclusive” by shifting the focus of trade from large companies to smaller Internet-based enterprises.

However, for businesses of all sizes to take full advantage of e-commerce, global rules on e-commerce are needed, Ms Kreis argued. Also helpful to business would be full implementation by governments of the WTO’s Trade Facilitation Agreement.

“It’s obviously a journey. Rome wasn’t built in a day, but we are seeing things move in the right direction,” she declared.

The importance of youth participation in trade and their expectations for the future was also highlighted by several of the keynote speakers.

Adebola Williams, CEO for the Nigerian-based media company RED, noted that the Internet has “democratized the trading space” and that in Africa, the youngest continent, “things are changing really fast, technology is a real game-changer for young people”.  A system based on rules recognized as providing both fairness and opportunity is important to ensure their support and participation.

“It’s the new generation of Africans that are leading change. They want to be engaged, they want to trade differently, they want equality and fairness,” Mr Williams said.