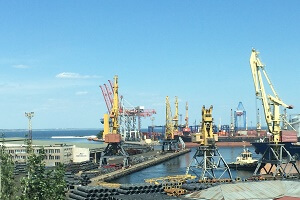 The Port Community System (PCS) in Odessa, Ukraine, is a success story for trade facilitation. The PCS system, launched after UNECE capacity-building seminars in Kiev in 2010 and Odessa in 2011, is up and running and today inspires broader work on trade facilitation in the country thanks to its achievements:

These successes were highlighted at the eighth annual UNECE seminar in Odessa on 1 June 2018, co-organized with the International Port Community Systems Association (IPCSA), of which the Odessa PCS became a member after it started work in 2014. The story of the Odessa PCS, named PPL33-35 after the first three UNECE Recommendations on the Single Window for export and import clearance (Recommendations 33, 34, and 35), can be found at the website of the project www.singlewindow.org.

UNECE has been collaborating with Ukraine on trade facilitation in a number of key areas. These include developing a Single Window showcasing how such a system can be achieved in a transition economy, and contributing to the development of a national trade facilitation body (the Interagency Working Group on Trade Facilitation and Logistics, and now the relevant committee under the new Ukrainian Council on Trade). An assessment of the readiness of Ukraine to implement the WTO Trade Facilitation Agreement (TFA) used by a seminar organized by UNECE and the US Commercial Law Development Program in March 2018 supported the implementation of the TFA measures in Ukraine.

The concept of a national Single Window has received a boost in the last two years. A Single Window system developed by the Ministry of Finance became operational on 1 February 2018. The Parliament of Ukraine passed at first reading in April 2018 a bill amending the Customs Code of Ukraine and a series of other laws of Ukraine regarding the introduction of the Single Window system and streamlining the control procedures for goods crossing the customs border of Ukraine.

The seminar reviewed what has been achieved, and what still needed to be done. Richard Morton (Secretary General of IPCSA), Sue Probert (Chairperson of the UN Centre for Trade Facilitation and Electronic Business, UN/CEFACT), Alexander Fedorov (CEO of PPL 33-35) and Mario Apostolov (UNECE Regional Adviser) made the case for more thorough implementation of international standards for data harmonization and information exchange. The seminar also resulted in a number of practical recommendations to deepen trade facilitation work in Ukraine and other countries, for which the Ukrainian partners will seek funding:

1. Scale up the successes of the Odessa Port Community System to all of Ukraine and to other countries with economies in transition. Carry out a survey of the business community on what has been achieved and what still has to be done, as requested by stakeholders.

3. Explore possibilities for assistance on time release studies at different borders.  Time Release Studies are a trade facilitation measure based on a methodology developed by the World Customs Organization. They are included in the WTO TFA and have to be carried out periodically. PPL 33-35 has already carried out such a study, yet more resources are needed from development partners to do more such studies at other border-crossings, and on a periodical basis.

4. Undertake a study on linking trade facilitation tools with sustainable development in Ukraine.

5. Strengthen the implementation of international (UNECE, UN/CEFACT, EU) standards for trade information exchange in the development of port community, Single Window, and other IT systems, and in fulfilling Ukraine’s commitments on the WTO TFA.

6. Explore possibilities to develop and use in the Port Community System permits and certificates in electronic format, as presented at the UNECE Odessa seminars in 2017 and 2018.

7. Organize training for Ukrainian experts on strategic planning for trade facilitation and key issues in trade facilitation implementation, including simplification of documentary procedures, use of international standards, Single Window and a monitoring mechanism.

8. Propose organization of a conference on convergence of standard setting work for trade facilitation and e-business.

9. Develop a publication on multimodal transport and trade facilitation in collaboration with Ukrainian and international partners, and support the finalization of a new edition of the UNECE English-Russian glossary of trade facilitation terms (now adding Chinese).