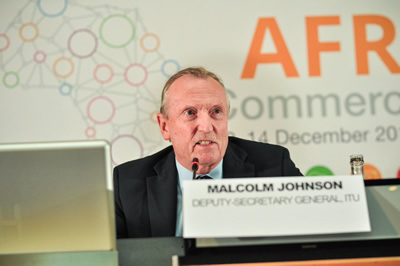 Tear down barriers and African e-commerce will thrive, say CEOs

Barriers to domestic and cross-border e-commerce in Africa and how to lower them were thrashed out by business and government leaders on 11 December at UNCTAD’s Africa eCommerce Week in Nairobi, Africa.

“More than 50% of the world is now connected to the internet,” he said. In Africa, however less than a quarter of people were, and rural areas in sub-Saharan were even more poorly served.

“One of the biggest problems is a lack of an incentive for people to get connected,” he said. Digital skills needed building so that people – especially women – could appreciate the returns available by getting online.

“People have to be persuaded as to why it’s to their advantage to spend the money to get connected.”

Jessica Anuna, a graduate of UNCTAD’s e-Founder Fellowship Initiative and who runs Klasha, an online fashion retailer for African millennials, said that the barriers to e-commerce were almost prohibitively high.

“It’s cheaper for me to ship from Asia than from within Africa,” she said.

However, Dylan Piatti, industry chief of staff at Deloitte Africa and chairman of the Ecommerce Forum Africa, said that “commonalities” were emerging in terms of what was needed for businesses entering the digital space. Cross-border data restrictions were an example, he said, calling for a pan-African solution.

“When is the best time to plant a tree?” he asked. “The answer is yesterday, today and tomorrow.”

The power of the marketplace

Chris Folayan, the chief executive officer of MallforAfrica, an online retailer, said that he thought the cost of getting online remained a major impediment holding Africa back.

“Implementing trust modules is also key,” he said, explaining that unless consumers can trust online services, they would not buy from them.

African universities were getting on board, she said, but was required to connect their work to social needs.

Nicolas Martin, co-chief executive officer of African e-commerce giant Jumia, said while the most impactful actions were always the most long-term and expensive, there were low-hanging fruit to picked.

For example, more needed to be done to tailor bespoke regulatory solutions for Africa in order to attract international investment and creative a conducive environment. He said the African investment climate “needed better PR”.

He also said that simply implanting the 25-year old regulatory regimes of Europe into the six-year old market of Africa would be “suicide” for new businesses.

“The coordinated effort of millions will bring about the change we need in Africa,” Mr. Martin said. “The power of the marketplace is huge.”

Allan Rwakatungu, chief executive officer of Xente Tech Limited, a payments and shopping app, said that his product was popular in his home country of Uganda but the problem was to scale the business Africa-wide.

The size and diversity of Africa was an opportunity since digital models only made sense at scale, so trading environments in different countries needed to be harmonized, he said.

Elephant in the room

The chief executive officer of trade promotion agency TradeMark East Africa, Frank Matsaert, said that the formation of the African Continental Free Trade Area, foreseen in an all-Africa agreement signed in March 2018, was a response to Mr. Rwakatungu’s point.

“We need to get those policies in place and drive those outcomes,” he said. However, trade logistics networks remained inefficient in Africa since many were operated by cartels.

“In a world that is increasingly nationalistic, it’s important to remember that trade lifts all boats,” Mr. Matsaert said, identifying political will as the elusive element in faster progress toward implementation of regional and continental trade integration aspirations.

“There is a lot that needs to be done,” he said. But without making better goods that are worth exporting, building digital trade platforms would only go so far, he said, noting that so far e-commerce traffic favoured imports to Africa from abroad.

Mr. Okot Okello said he understood the need to improve road, energy and regulatory infrastructures so that hard-to-reach areas in Uganda and elsewhere could benefit.

For his part, Peter Munya, Kenya’s Cabinet Secretary for the Ministry of Industry Trade and Cooperatives, said “inclusion is the elephant in the room”.

Rural populations were still left out despite the work that had been done in Kenya to build fibre optic networks and make other advances, he said. Small and medium-sized enterprises found it hard to engage with trade logistics cartels, he added, but the Kenyan government was working hard to remedy such issues.

Speakers from the floor said that while the analysis of the problems was sound, practical solutions were often not forthcoming.

The session was moderated by Kenyan entrepreneur and media personality Julie Gichuru, and broadcast on YouTube and Facebook.