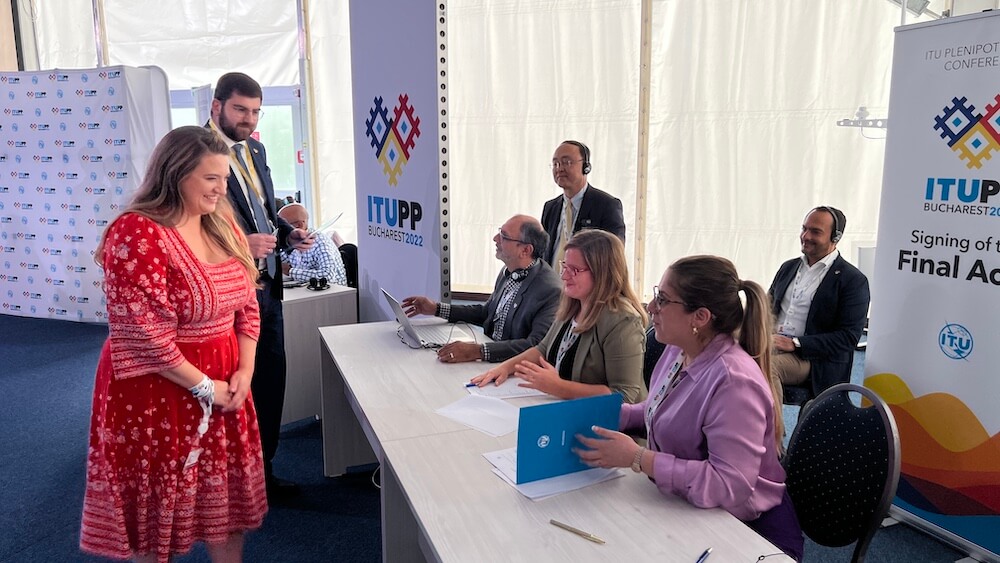 A meeting of the highest decision-making body of the International Telecommunication Union (ITU) closed today with Member States reaching consensus on actions to ensure that digital technology reaches and benefits people across the world.

The Plenipotentiary Conference of the United Nations specialized agency for information and communication technologies (ICTs) concluded its work in Bucharest, Romania, with agreements on how to harness the advantages of some of the world’s most promising technologies.

“In the near future, digitalization has the capacity to offer solutions to the challenges that humanity is facing, for instance by creating workplaces, promoting education, or fighting climate change and facilitating the green transition,” Romanian Prime Minister Nicolae Ciucă told delegates in a video message during the quadrennial conference. “Digital transformation and telecommunication development,” he said, “are anchors of the economy of the future.”

ITU Secretary-General Houlin Zhao, in his last conference at the helm of the organization, said he had “witnessed first-hand how ICT innovations have changed the world – and how important ITU has been in advancing this digital transformation.”

Reflecting on his 36 years at the organization, including nearly two-and-a-half decades as an elected official, Zhao said: “We need to seize this moment and build on the decisions taken at this global conference to accelerate digital transformation, including for the 2.7 billion people worldwide who are still unconnected.”

Digital networks and technologies have empowered billions of people worldwide. Yet after a surge due to COVID-19, Internet uptake has slowed over the past year, leaving one-third of the world’s population still unconnected.

The international guidance emerging from the conference “will help build a global economy and society that is more sustainable, more prosperous, and more connected,” added Zhao.

Sabin Sărmaș, conference chair and head of host country Romania’s parliamentary Information Technology and Communications Commission, said: “The consensus-based resolutions, built through negotiations and compromise, come as a rare example of accord these days among countries worldwide on issues of mutual concern for the future of humanity and the planet.”

Consensus on our global future

The conference between 26 September and 14 October brought together over 3,000 delegates, including government ministers or officials from 183 of ITU’s 193 Member States, as well as international and regional organizations, academia, and private-sector representatives.

The Final Act bringing together all the resolutions adopted at the Plenipotentiary, was signed by 157 Member States.

Key decisions agreed at the conference included resolutions on:

Delegates made history with the election of Doreen Bogdan-Martin (U.S.) as ITU’s next Secretary-General. Bogdan-Martin will become the first woman to lead the 157-year-old organization, which became a UN specialized agency in 1947.

Zhao, who has championed gender equality both at the UN and in the tech industry, congratulated Bogdan-Martin, adding: “The election of the next ITU leadership team signals the beginning of a new era.”

Each of the five elected officials will serve a four-year term starting on 1 January 2023.

In addition to the senior leadership, the conference elected 48 Member States to regionally allocated seats on the ITU Council, the governing body between sessions of the quadrennial Plenipotentiary Conference.

The conference also selected 12 members to serve on the Radio Regulations Board, an independent authority that safeguards the assignment and use of radio frequencies worldwide.

A total of 33% of the delegates to the conference in Bucharest were women, compared to 29% at ITU’s last Plenipotentiary, held in Dubai in 2018.

“Our objective was to go beyond the traditional approach and make sure that women would have an equal opportunity to engage on substantial matters for the future of ITU and for digital technology and policy evolution,” said Cristiana Flutur, International Affairs Director at Romania’s National Authority for Management and Regulation in Communications (ANCOM), who helped coordinate the conference. “Bringing more female representatives into policy-making circles should encourage more women to take on leadership roles and voice their opinions.”

Two elected officials are set to step down at year-end after reaching the two-term limit in their respective posts.

Current Deputy Secretary-General Malcolm Johnson, recalling his 40 years of participation in ITU, first as a delegate and later as an elected official, encouraged ITU to maintain its tradition of working by consensus and to concentrate on its specific competencies, and wished ITU every success for the future.

Chaesub Lee, Director of the Telecommunication Standardization Bureau since 2015, underlined the value of ITU’s diverse expertise, saying: “We have to consider the business aspect, market aspect, even the political aspect of our work as an organization, all based on that technological knowledge, with a technical sense.”

Preparing for the digital future

ITU’s next Plenipotentiary Conference will take place in Doha, Qatar, in 2026.

In December 2023, ITU members will meet at the World Radiocommunication Conference (WRC-23) in Dubai, United Arab Emirates, to update the Radio Regulations, the sole international treaty governing the use of the radio frequency spectrum, including for geostationary and non-geostationary satellite orbits.