Taxation of the digitalized economy

The South Centre and the West African Tax Administration Forum (WATAF) jointly organized a two-day capacity-building program on the topic of “Taxation of the digitalized economy” on 7-8 June 2022. The purpose of this program was to provide South Centre and WATAF member countries’ tax officials with detailed information on the “Two-Pillar solution” politically agreed upon in the Organisation for Economic Co-operation and Development (OECD) Inclusive Framework (IF) on 8 October 2021, and alternative policy measures available for developing countries, especially Article 12B of the United Nations (UN) Model Tax Convention which provides a solution for taxing Automated Digital Services (ADS). The peer-to-peer training was provided by tax officials from the Governments of India and Nigeria, experts from WATAF and the African Tax Administration Forum (ATAF), the International Lawyers Project, and the staff of the South Centre.

Indeed, the need to tax the digital economy led to two proposals, one from the OECD Inclusive Framework known as the Two-Pillar solution, the other from the UN Tax Committee known as Article 12B of the UN Model Tax Convention (UNMTC). To these two proposals are added the national or unilateral measures that some developing countries have already been using to collect tax revenues from activities carried out without a physical presence in their territory. Therefore, this capacity-building program brought together experts for peer-to-peer exchange, analysis of the different proposals, and experience sharing.

The capacity-building program covered topics such as national measures in developing countries, the Article 12B on taxing income from Automated Digital Services (ADS), the content of Pillar One, specifically the scope, nexus, and revenue sourcing rules, the tax base determination process, the elimination of double taxation, dispute prevention and resolution mechanism and the mutual agreement procedure (MAP). It also covered the Pillar Two content, especially the Global Anti Base Erosion (GloBE) model rules and the Subject To Tax Rule (STTR).

The session began with opening remarks by the Executive Secretary of WATAF, Mr. Babatunde Oladapo, and an opening statement by the Executive Director of the South Centre, Prof. Carlos Correa. 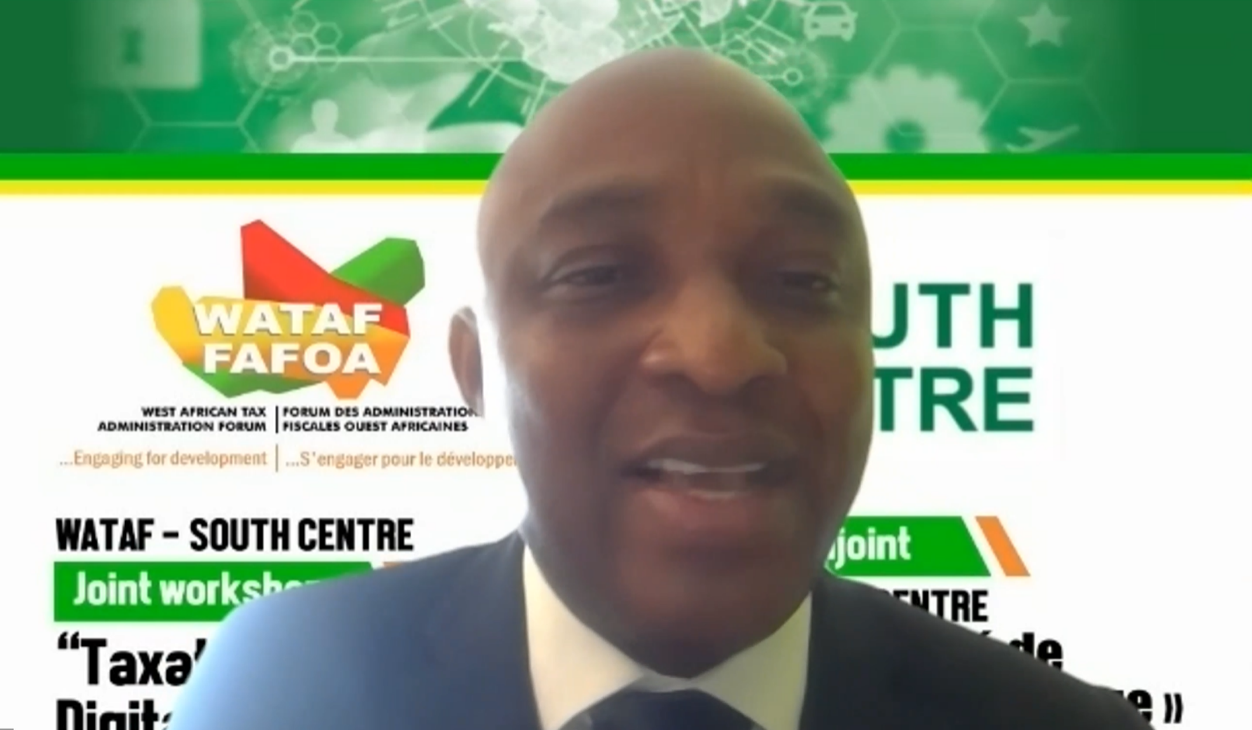 Mr. Oladapo, in his opening remarks, highlighted that the purpose of this capacity-building program is to respond to the question of “how can we (developing countries in general and African countries in particular) generate sufficient revenue to fund our development?” He stated that it is good to have a proposed solution from the OECD Inclusive Framework, but this solution as published seems to be not inclusive, and the recent study commissioned by the Coalition for Dialogue on Africa (CoDA) and the South Centre illustrates this. The study has shown that if the OECD/IF’s proposal is implemented, developing countries will be left behind in terms of collecting revenues from legitimate businesses operated in their territories. Therefore, the workshop was an opportunity to harmonize African countries’ positions, so that the participants will be able to inform the policymakers in their respective countries. 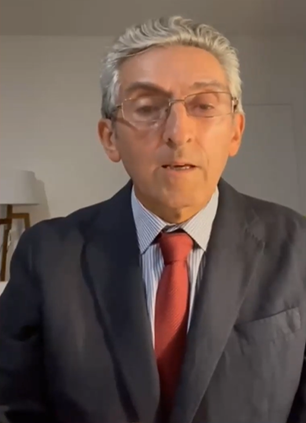 Prof. Correa, in his opening remarks, recalled that many companies are still not paying taxes in developing countries where they do business due to the context of the digitalization of the economy. Thus, it is important to address this issue. Furthermore, developing countries need to make a decision whether to join or not the Two-Pillar solution, and the study by CoDA and South Centre has provided the revenue estimates from the Pillar One solution and the UN Model Tax Convention solution as well. The South Centre, through this capacity-building program co-organized with WATAF, aims to provide countries with information that will support them to make informed decisions.

After the opening remarks, Abdul Muheet Chowdhary and Sébastien Babou Diasso from the South Centre provided the participants with the results of the research paper commissioned by CoDA and South Centre on comparing tax revenues to be raised by developing countries from Amount A and the UNMTC Article 12B regimes. The results show that the UNMTC Article 12B offers the highest tax revenue for developing countries, especially when applied with a broad scope including both “pure” ADS and “hybrid” ADS with a 4% tax rate. Pure ADS meant exclusively the services mentioned in paragraph 6 of Article 12B, while hybrid ADS applied to a broader range.

After the presentation of the revenue estimates, the floor was given to Mr. Mathew Olusanya Gbonjubola, co-Chair of the UN Tax Committee and Group Lead of the Special Tax Operations Group at the Federal Inland Revenue Service in Nigeria who shared his views in his personal capacity. Mr. Edouardo Terada Kosmiskas from the Permanent Mission of Brazil to the World Trade Organization (WTO) and Economic Organizations in Geneva also shared with the participants the position of his country. 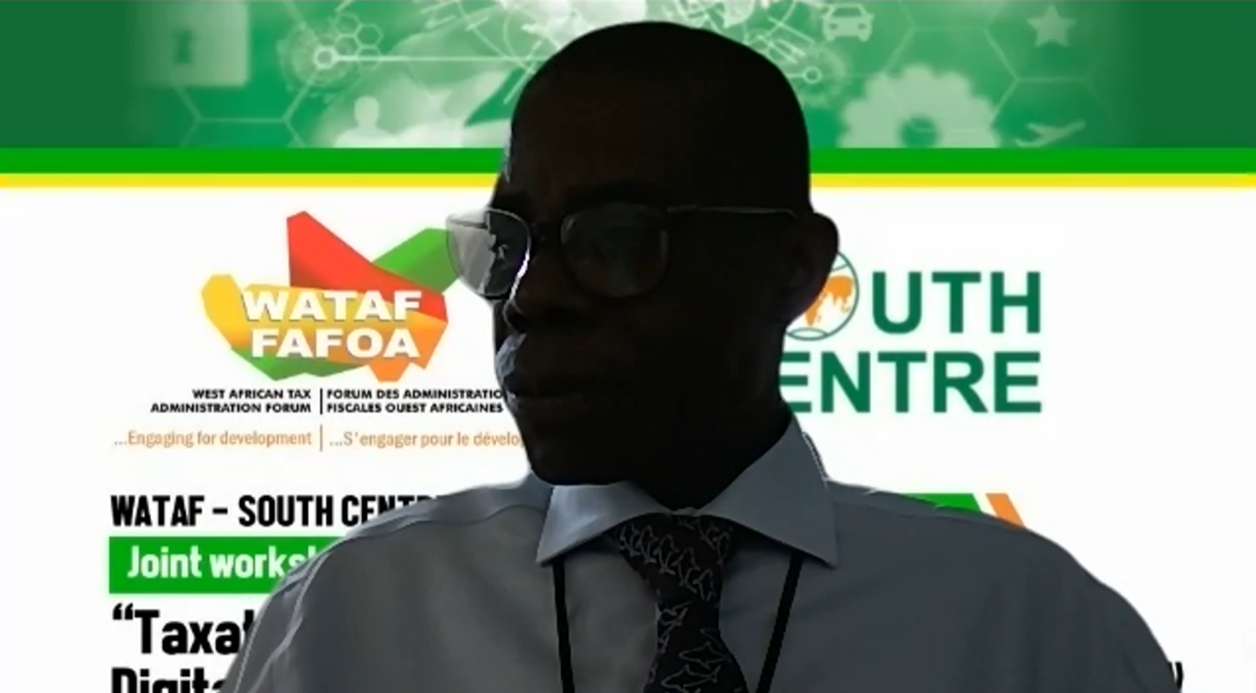 The second distinction is that Amount A is based on a top-down mechanism while Article 12B is based on a transaction-by-transaction approach at the country level. According to Mr. Gbonjubola, it is advisable for countries to wait until they have the full package of the Amount A content and, based on that information, carry out their own impact assessment at the country level of the expected gain or loss from the use of Amount A. 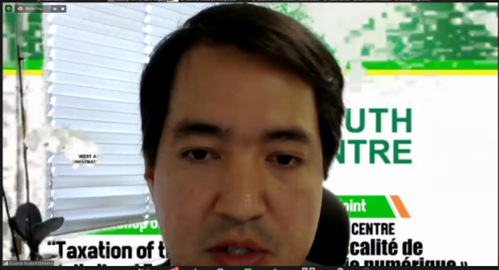 Edouardo Terada Kosmiskas, Permanent Mission of Brazil to the WTO

Mr. Edouardo Terada Kosmiskas, Desk Officer for e-commerce and services at the Permanent Mission of Brazil to the WTO and Economic Organizations in Geneva said that the participation of developing countries in the discussion on the reform of the international tax system should end up in a fair taxing right, greater transparency and reduced uncertainty in the process of the reform. To Mr. Kosmiskas, the Two-Pillar solution has become extremely complex and will be less effective. Furthermore, the proposed solution of the OECD seemed to go beyond what was initially planned and does not reflect the perspective of developing countries. He said Brazil has not yet carried out an impact assessment due to the lack of the necessary data. He added that the finalization of the rules, in particular relating to the elimination of double taxation, could affect the revenue impacts.

Regarding Article 12B, he said the revenue gain estimate from the federal revenue authority of Brazil is not very different from those found in the study commissioned by CoDA and South Centre. 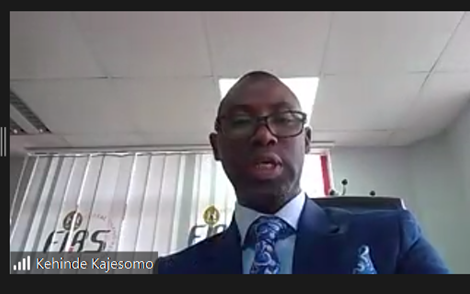 With the opening session concluded, the training started with an overview of national measures and Article 12B of the UNMTC provided by Mr. Kehinde Kajesomo, Director of Treaties & International Tax Policies Division in the department of Tax & Policy Advisory at the Federal Inland Revenue Service of Nigeria. Mr. Kajesomo presented the taxation system in the traditional economy and how the digitalization of the economy made the existing rules outdated, and the realities countries have been facing due to digitalization. He further presented options for unilateral measures and different tools used so far such as the Significant Economic Presence (SEP), the Withholding Tax (WHT) system, the equalization levy, and the digital services tax (DST).

For each of these tools, he discussed the challenges and provided the pros and cons of the use of unilateral measures. As for the UNMTC Article 12B, Mr. Kajesomo explained the income and services covered and not covered, the benefit and challenges of the OECD solution, and ended his presentation with some recommendations to African countries regarding the use of Article 12B. 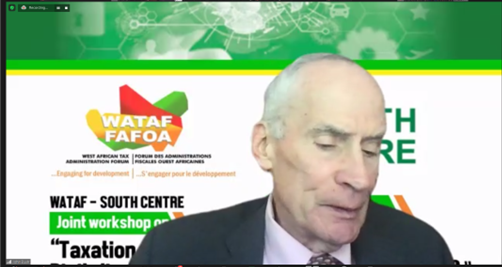 The following presentation covered scope, nexus, and revenue sourcing rules under Pillar One provided by Mr. John Bush, Program Director for Tax and Fiscal Reform at International Lawyers Project (ILP), and Mr. Kehinde Kajesomo from the Federal Inland Revenue Service of Nigeria. They explained to the participants how to identify whether a group is in-scope of Amount A reallocation or not, how the nexus rules apply, and how to source revenues of a group in the different market jurisdictions where it conducts activities and derives revenues. 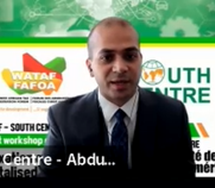 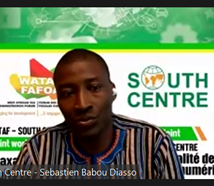 The next presentation was regarding the tax base determinations provided by Mr. John Bush from ILP, Mr. Abdul Muheet Chowdhary, Senior Programme Officer, and Mr. Sebastien Babou Diasso, Research Consultant – Tax, both with the South Centre Tax Initiative of the South Centre. They explained to the participants through practical examples the different steps that a multinational enterprise (MNE) group will follow to compute its profit before tax until it arrives at the share of the profit to reallocate to each market jurisdiction for taxation.

The program on the first day ended with a presentation on the elimination of double taxation provided by Dr. Sri Vatsa Sehra from the Central Board of Direct Taxes (CBDT) of India. He presented the process of identification of paying entities, the calculation of the residual profit in the paying entity, and the allocation of the paying or elimination liability between the identified entities as per the rules of the OECD. 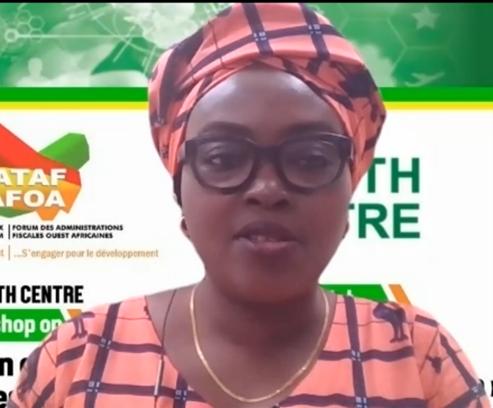 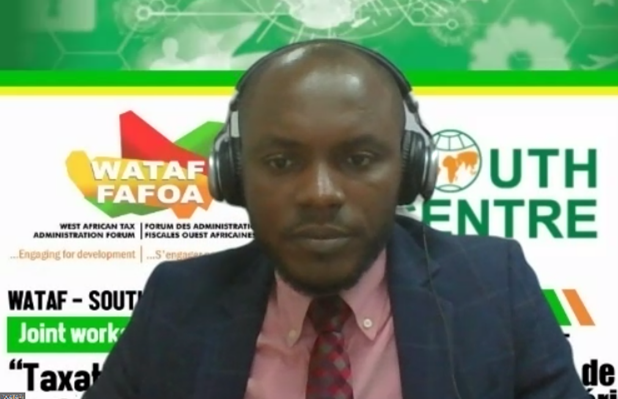 The sessions of the two-day capacity-building were moderated by both the West African Tax Administration Forum (WATAF) and the South Centre. The moderators from WATAF were Tochukwu Onyemata, Communications, and Liaison Manager, and Dan-Asabe Ozayashi, Training and Capacity Development Manager. From the South Centre, the moderators were Fernando Rosales, Coordinator of the Sustainable Development and Climate Change programme, and Abdul Muheet Chowdhary.

On the last day of the capacity-building activity, several other topics were discussed with the participants. These were the dispute prevention and resolution mechanism, mutual agreement procedure, the GloBE Model rules under Pillar Two, and the Subject To Tax Rule (STTR).

Mr. Chetan Rao, Director of Foreign Tax & Tax Research Division, and Ms. Vidyotma Singh, Deputy Commissioner of Foreign Tax & Tax Research Division at the Central Board of Direct Taxes (CBDT) of India provided information on the overall tax certainty framework for Amount A, in particular the process of constituting a review panel and a determination panel, the role of the actors involved, and the decision-making process. They also presented the tax certainty framework for issues related to Amount A, explaining how is the proposed functioning of dispute resolution panels and the risks they could pose to existing bilateral tax treaties.

Mr. Sukhad Chaturvedi, Under Secretary at the same Division, also provided information on the MAP process, how to implement MAP decisions, and shared practical case studies and lessons learned from developing countries’ experiences. 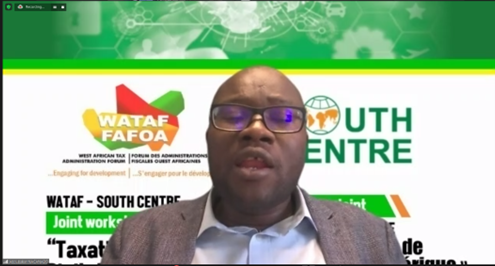 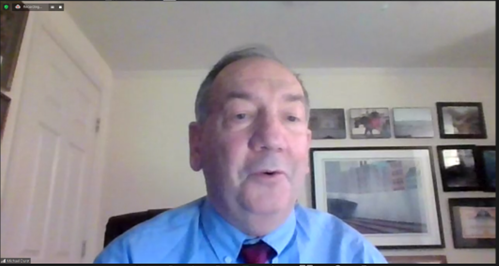 Mr. Abubakar Nacanabo, Chair of the ATAF Technical Committee on Cross-Border Taxation, and Mr. Michael Durst, Special Advisor for Fiscal Reform at the International Lawyers Project (ILP) explained the functioning of the GloBE model rules. They described the scope, the computation of GloBE income or loss, the effective tax rate, and the top-up tax, the application of the Income Inclusion Rule (IIR), the Under-Taxed Payments Rule (UTPR), and the Qualified Domestic Minimum Top-Up Tax (QDMTT).

The last presentation was provided by Abdul Muheet Chowdhary and Sébastien Babou Diasso from the South Centre regarding the Subject To Tax Rule (STTR). They analyzed the scope and operation under this rule, highlighting some of the key deficiencies in its existing design, and presented data on withholding rates for interest and royalties found in tax treaties for African countries and other developing countries. As the STTR is still under negotiation, the data showed the clear need for an STTR with a broad scope and simple design if it is to be useful for developing countries.

The two-day capacity-building program ended with closing remarks made by Mr. Fernando Rosales, Coordinator of the Sustainable Development and Climate Change Programme of the South Centre. Mr. Rosales complimented the trainers for the quality and depth of the presentations and thanked the participants for the interest shown during the two-day session. 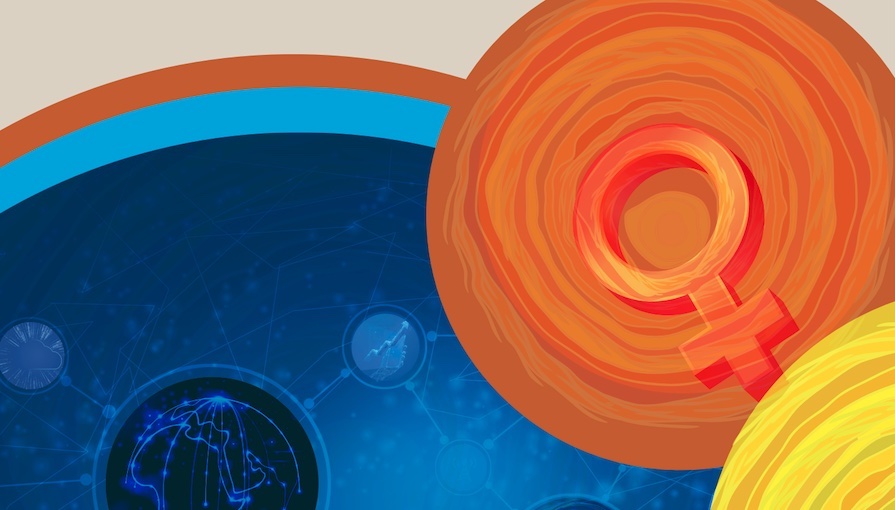 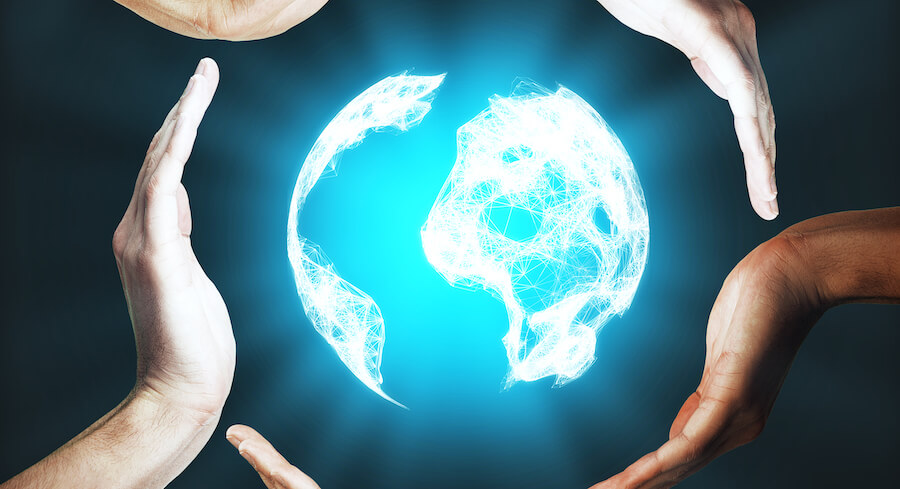 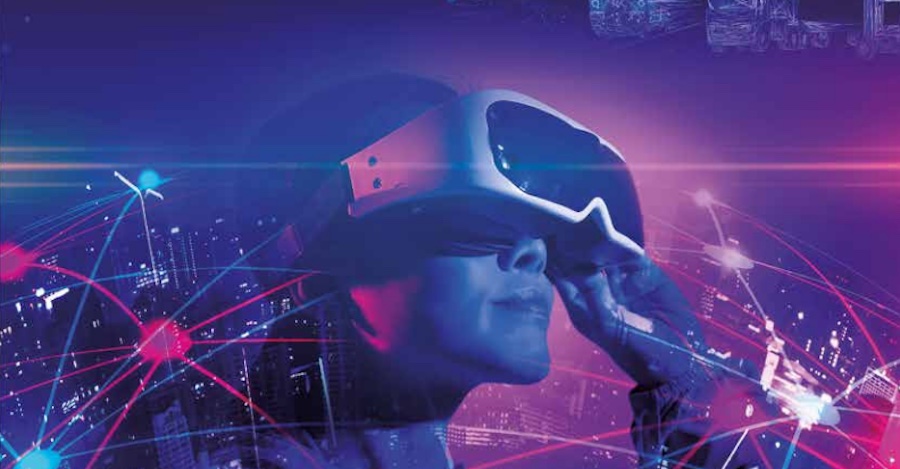