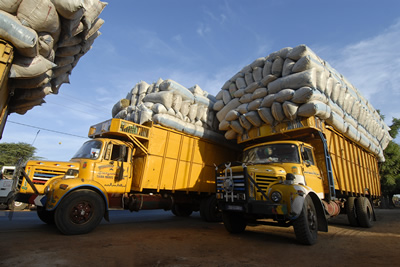 The tool, developed by UNCTAD and the African Union, will help make trade on the continent easier and less costly.

An online platform developed by UNCTAD and the African Union to help remove non-tariff barriers to trade in Africa became operational on 13 January.

Traders and businesses moving goods across the continent can now instantly report the challenges they encounter, such as quotas, excessive import documents or unjustified packaging requirements.

The tool, tradebarriers.africa, will help African governments monitor and eliminate such barriers, which slow the movement of goods and cost importers and exporters in the region billions annually.

An UNCTAD report shows that African countries could gain US$20 billion each year by tackling such barriers at the continental level – much more than the $3.6 billion they could pick up by eliminating tariffs.

“That’s why the success of the African Continental Free Trade Area depends in part on how well governments can track and remove them,” she said, referring to the agreement signed by African governments to create a single, continent-wide market for goods and services.

The AfCFTA, which entered into force in May 2019, is expected to boost intra-African trade, which at 16% is low compared to other regional blocs. For example, 68% of the European Union’s trade take place among EU nations. For the Asian region, the share is 60%.

The agreement requires member countries to remove tariffs on 90% of goods. But negotiators realized that non-tariff barriers must also be addressed and called for a reporting, monitoring and elimination mechanism.

The online platform built by UNCTAD and the African Union is a direct response to that demand.

Complaints logged on the platform will be monitored by government officials in each nation and a special coordination unit that’s housed in the AfCFTA secretariat.

The unit will be responsible for verifying a complaint. Once verified, officials in the countries concerned will be tasked with addressing the issue within set timelines prescribed by the AfCFTA agreement.

UNCTAD and the African Union trained 60 public officials and business representatives from across Africa on how to use the tool in December 2019 in Nairobi, Kenya.

They practiced logging and responding to complaints, in addition to learning more about non-tariff barriers and their effects on trade and business opportunities.

Justin Bayili, a business representative who heads the Ghana-based Borderless Alliance, agreed. “The online tool will play a key role in helping my organization effectively and efficiently tackle the challenges faced by the companies we represent,” he said.

UNCTAD and the African Union first presented tradebarriers.africa in July 2019 during the launch of the AfCFTA’s operational phase at the 12th African Union Extraordinary Summit in Niamey, Niger.

Following the official presentation, they conducted multiple simulation exercises with business and government representatives to identify any possible operational challenges.

One of the challenges was linguistic. Africa is home to more than 1,000 languages. So the person who logs a complaint may speak a different language from the official in charge of dealing with the issue.

Such would be the case, for example, if an English-speaking truck driver from Ghana logged a complaint about the number of import documents required to deliver Ghanaian cocoa to importers in Togo – a complaint that would be sent to French-speaking Togolese officials.

“For the online tool to be effective, communication must be instantaneous,” said Christian Knebel, an UNCTAD economist working on the project.

The solution, he said, was to add a plug-in to the online platform that automatically translates between Arabic, English, French, Portuguese and Swahili – languages that are widely spoken across the continent. More languages are being added.

UNCTAD’s work on the AfCFTA non-tariff barriers mechanism is funded by the German government.