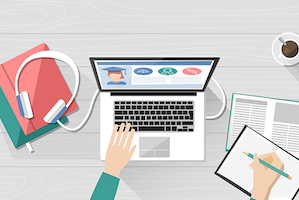 The Boom of Online Courses

Throughout the world, a generation that is beginning its working life is confronted with an unprecedented economic context. “This is a period of radical uncertainty, an order of magnitude greater than anything we’re used to.” as history professor Adam Tooze, who studied the effects of the 2008 financial crisis, told The New York Times.

For many in Latin America and the Caribbean, this conjuncture adds to the existing economic gaps and digital gaps that curtail their possibilities of having the time or the basic means to join the digital transition, or take advantage of what it can offer. It is a gap that starts very early in life: according to data from the Information Center for the Improvement of Learning (CIMA, in Spanish), in 2013 the average number of students with internet access reached only 66 percent in secondary schools in the region; in 2019 there was, on average, one computer for every 14 students. Furthermore, according to a study by the Economic Commission for Latin America and the Caribbean (ECLAC), the average digital gap between rural and urban areas is 27 percent in the region.

This why efforts to close these gaps are so essential, initiatives such as DigiLAC , a virtual platform that seeks to close the existing gaps in broadband penetration in the region, and which was created by the Inter-American Development Bank (IDB); or Internet for Everyone, a company which enables telecommunications operators to use existing infrastructure to expand coverage of mobile technology services, of which IDB Invest, the IDB Group’s multilateral bank for the private sector, is part of.