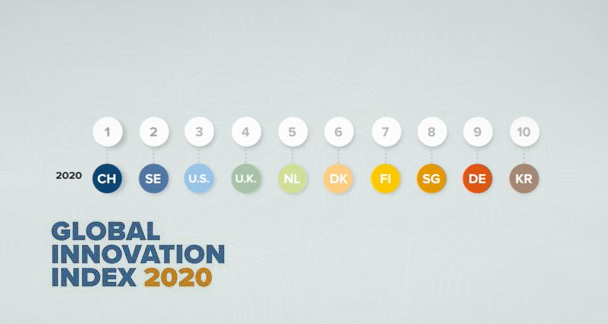 The COVID-19 pandemic is severely pressuring a long-building rise in worldwide innovation, likely hindering some innovative activities while catalyzing ingenuity elsewhere, notably in the health sector, according to the Global Innovation Index (GII) 2020.

The GII 2020’s theme asks Who Will Finance Innovation? A key question is how the economic fallout from the COVID-19 crisis will impact start-ups, venture capital, and other traditional sources of innovation financing. Many governments are setting up emergency relief packages to cushion the impact of the lockdown and face the looming recession. But the GII 2020 advises that further rounds of support must prioritize and then broaden support for innovation, particularly for smaller enterprises and start-ups that are facing hurdles in accessing rescue packages.

“The rapid, worldwide spread of the coronavirus requires fresh thinking to ensure a shared victory over this quintessential global challenge,” says WIPO Director General Francis Gurry. “Even as we all grapple with the immediate human and economic effects of the COVID-19 pandemic, governments need to ensure that rescue packages are future oriented and support the individuals, research institutes, companies and others with innovative and collaborative new ideas for the post-COVID era. Innovations equal solutions.”

In its associated annual ranking of the world’s economies on innovation capacity and output, the GII shows year-on-year stability at the top, but a gradual eastward shift in the locus of innovation as a group of Asian economies – notably China, India, the Philippines and Viet Nam – have advanced considerably in the innovation ranking over the years.

Switzerland, Sweden, U.S., U.K and Netherlands lead the innovation ranking, with a second Asian economy – the Republic of Korea – joining the top 10 for the first time (Singapore is number 8). The top 10 is dominated by high-income countries.

Video: This short video highlights the key takeaways from the GII 2020.

The geography of innovation continues to shift, the GII 2020 shows. Over the years, India, China, the Philippines, and Viet Nam are the economies with the most significant progress in their GII innovation ranking over time. All four are now in the top 50.

The top-performing economies in the GII are still almost exclusively from the high-income group, with China (14th) remaining the only middle-income economy in the GII top 30. Malaysia (33rd) follows. India (48th) and the Philippines (50th) make it to the top 50 for the first time. The Philippines achieves its best rank ever—in 2014, it ranked 100th. Heading the lower middle-income group, Viet Nam ranks 42nd for the second consecutive year— from 71st in 2014. Indonesia (85th) joins the top 10 of this group. Tanzania tops the low-income group (88th).

“As shown by China, India and Viet Nam, the persistent pursuit of innovation pays off over time,” says Former Dean and Professor of Management at Cornell University Soumitra Dutta. “The GII has been used by governments of those countries and others around the world to improve their innovation performance.”

“There are now genuine risks to international openness and collaboration on innovation. Faced with unprecedented challenges, whether sanitary, environmental, economic or social, the world needs to combine efforts and resources to ensure the continuous financing of innovation,” says INSEAD Executive Director for Global Indices Bruno Lanvin.

The two economies in Northern America, the U.S. and Canada, rank in the top 20 in this year’s GII.
The U.S. maintains its 3rd position this year, thanks to its strong performance across all GII areas. It is the first economy worldwide in the GII indicators that capure the quality of innovation, with its excellent universities and high-quality scientific publications. The U.S. hosts the largest number (25) of top science and technology clusters in the world, led by the San Jose-San Francisco cluster.

Sixteen of the GII leaders in the top 25 are European countries, with seven of them ranking in the top 10.
Switzerland remains the world’s leader in innovation for the 10th consecutive year. A consistent producer of high-quality innovation outcomes, it improves in patents and venture capital deals.
A solid human capital and research system, coupled with a sophisticated market with innovative firms, put Sweden in the second spot for the second consecutive year.

Due to a combination of performance improvements and model changes, France is among the top 20 economies that saw the most impressive rank increase this year, taking the 12th position, its best GII rank since 2009. It ranks 5th in the new indicator global brand value and is in the top 10 in R&D-intensive global companies, quality of scientific publications, and research talent in business enterprises. France hosts five of the world top 100 science and technology clusters, with Paris ranking 10th this year.

The two most innovative economies in this region – Singapore (8) and the Republic of Korea (10) – rank in the top 10. China retains its 14th position, after its rapid rise in recent years.

China has established itself as an innovation leader, with high ranks in important metrics including patents, utility models, trademarks, industrial designs, and creative goods exports. It boasts 17 of the top science and technology clusters worldwide – with Shenzhen-Hong Kong-Guangzhou and Beijing in the 2nd and 4th spots respectively.

The Republic of Korea moves into the top 10 group of the GII for the first time. It improves its ranks in various indicators, including environmental performance, patent families, quality of scientific publications, and high-technology manufactures, while retaining top 3 positions in R&D expenditures, researchers, and PCT patents. Three of its clusters make it to the top 100, with Seoul ranking 3rd worldwide.

In the region, Malaysia (33) and the Philippines (50) move up the ranking thanks to its first-class tertiary education system, sophisticated capital market, and a vibrant private sector. Malaysia excels in high-technology exports and creative goods exports. The Philippines enters the top 50 this year, with top 10 ranks in utility models, productivity growth, high-technology exports and imports, and ICT services exports.

India (48) retains the highest rank in the region, followed by the Islamic Republic of Iran (67).
Moving up four positions since last year, India becomes the third most innovative lower middle-income economy in the world, thanks to newly available indicators and improvements in various areas of the GII. It ranks in the top 15 in indicators such as ICT services exports, government online services, graduates in science and engineering, and R&D-intensive global companies. Thanks to universities such as the Indian Institute of Technology in Bombay and Delhi and the Indian Institute of Science in Bengaluru, and its top scientific publications, India is the lower middle-income economy with the highest innovation quality.

This year Uzbekistan (93) enters the GII rankings and ranks 4th in its region, assisted by better data coverage. It ranks in the top 10 worldwide in three indicators: graduates in science and engineering, ease of starting a business, and capital investment.

Israel (13), Cyprus (29), and the United Arab Emirates (34) are the top three economies in this region.
Israel is the world leader in several key indicators such as researchers, R&D expenditures, and university-industry research collaboration. Thanks to these investments, Israel remains a top innovation player, especially in ICT services exports.

Saudi Arabia (66) and Jordan (81) are among the economies that saw a significant improvement in their ranking this year, due to a combination of performance improvements and model changes. Saudi Arabia takes the the 3rd place in ease of protecting minority investors and ranks 13th in the state of cluster development. Jordan improves in variables related to the quality of its credit market, and in particular in ease of getting credit, domestic credit to private sector, and venture capital deals.

Latin America and the Caribbean

Chile (54) ranks first in the region, followed by Mexico (55) and Costa Rica (56).
Brazil, Mexico, and Argentina host global R&D companies and are among the top 10 middle-income economies in the quality of innovation. Chile, Uruguay, and Brazil produce high levels of scientific and technical articles, with Brazil making an impact also in patents.

The region performs well in the new indicator global brands value: Mexico, Brazil, Colombia, and Argentina are all outperformers in this indicator, having many more valuable brands than their income levels would predict.

Mauritius (52), South Africa (60), Kenya (86) and the United Republic of Tanzania (88) are leading this region.
With high-quality institutions and a dynamic market, Mauritius is the 9th most innovative upper middle-income economy in the world. However, the 2020 rank for Mauritius has wide significant data variability as compared to last year. A mix of new data availability, data revisions at the source and performance effects explain Mauritius’ rank movements.

A sophisticated internal market is also the strongest area of South Africa, ranking first in market capitalization and ninth in domestic credit to the private sector. Kenya is among the economies holding the record of being innovation achievers for ten consecutive years, thanks to top 5 rankings in indicators such as ease of getting credit and R&D expenditures financed by abroad.

Tanzania benefits from a relatively well interlinked innovation system and good international connectivity and ranks in the top 25 in cost of redundancy dismissal and gross capital investment.

Rwanda (91) significantly improves its rankings this year, thanks partly by improved data coverage. It ranks in the top 15 in ease of getting credit, microfinance loans, and productivity growth.

About the Global Innovation Index

The Global Innovation Index 2020 (GII), in its 13th edition this year, is co-published by Cornell University, INSEAD, and the World Intellectual Property Organization (WIPO, a specialized agency of the United Nations).

Published annually since 2007, the GII is now a leading benchmarking tool for business executives, policy makers and others seeking insight into the state of innovation around the world. Policymakers, business leaders and other stakeholders use the GII to evaluate progress on a continual basis.  The study benefits from the experience of its Knowledge Partners: Confederation of Indian Industry, Dassault Systèmes – The 3DEXPERIENCE Company, and the National Confederation of Industry (CNI)—Brazil, as well as of an Advisory Board of international experts.

The core of the GII Report consists of a ranking of world economies’ innovation capabilities and results. Recognizing the key role of innovation as a driver of economic growth and prosperity, and the need for a broad  vision of innovation applicable to developed and emerging economies, the GII includes indicators that go beyond the traditional measures of innovation, such as the level of research and development.

To support the global innovation debate, to guide polices and to highlight good practices, metrics are required to assess innovation and related policy performance. The GII creates an environment in which innovation factors are under continual evaluation, including the following features:

The index is submitted to an independent statistical audit by the Joint Research Centre of the European Commission.