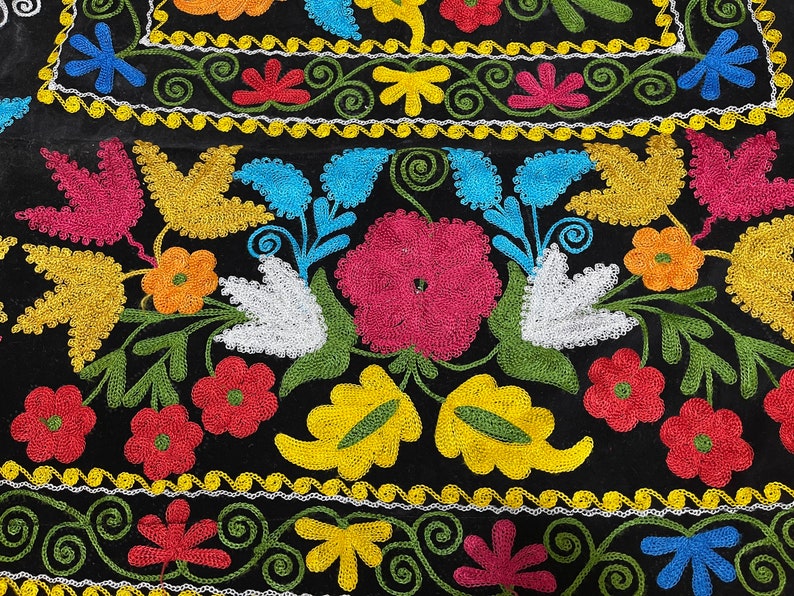 After graduating from the National Institute of Arts and Design in Tashkent, Abduvali worked as a researcher and curator for the applied arts fund at the Museum of Arts in Uzbekistan. The museum has a collection of over 7,000 samples of handmade embroidery, skullcaps (tyubeteika), jewelry, carpets, and other examples of craftsmanship from the beginning of the 19th century to the present day.

“I was fascinated by the Uzbek traditional clothing. During my work at the museum, I got to know the local artisans, and at the time we helped them participate in international exhibitions,” says Abduvali.

He understood the unique, traditional skills of local craftsmen. However, at that time, Uzbek artisans were unable to sell their products abroad. They traded only within the country, mostly selling to tourists and locals who appreciate traditional wear.

In 2016, because of a decline in sales, he diversified his product range by introducing clothes made from vintage embroideries. He then started his own production and hired local craftswomen to handmake robes, coats, chapans (traditional overcoat), and dresses using traditional production methods.

Abduvalli is one of the selected coaches of the International Trade Centre’s Ready4Trade Central Asia projects. The e-commerce initiative has been working with five Uzbek artisans since early 2020 to support them with launching online sales, mainly through Etsy and eBay.

So far, the project participants were able to acquire useful commercial skills, including how to analyse target markets, formulating e-commerce strategies, creating e-commerce content including product descriptions and photos, designing/creating an online store, and drafting shipping, privacy, and return policies.

“During the COVID-19 pandemic, many physical stores closed in Uzbekistan and artisans were left without sales. The Ready4Trade Central Asia initiative helped many of our artisans open online stores on Etsy and eBay and trained them on how to sell online,” says Abduvali.

“Before joining Ready4Trade, my monthly sales on Etsy were between $2,000 and $3,000”, the coach explains. “But now, after the Etsy Lab and the subsequent optimization of my e-shop, my sales increased to $5,000 in January 2022. My sales have grown by 100% since the beginning of the year. And the best thing: we have become a Star Seller on Etsy in February 2022,” he added.

Abduvalli is also a participant of the eBay Central Asian hub, a joint initiative of ITC and USAID, launched in 2021, where participants receive tailored one-to-one support in opening or improving existing eBay stores. This helps entrepreneurs to master their own sales while transferring the knowledge to peers.

“I am often asked for help to open an eBay store. Local artisans usually find me through social networks and ask for support. I plan to create and conduct courses for local artisans on e-commerce. In addition, I plan to apply this year for an exhibition in Santa Fe, in the United States,” says the proud owner.

Uzbekistan is one of the five beneficiary countries (Kazakhstan, Kyrgyzstan, Tajikistan, Turkmenistan, and Uzbekistan) of the Ready4Trade Central Asia project, funded by the European Union with €15 million, and implemented by ITC. The e-commerce trainings were also launched in Kazakhstan and Kyrgyzstan and include up to 200 participating small businesses.