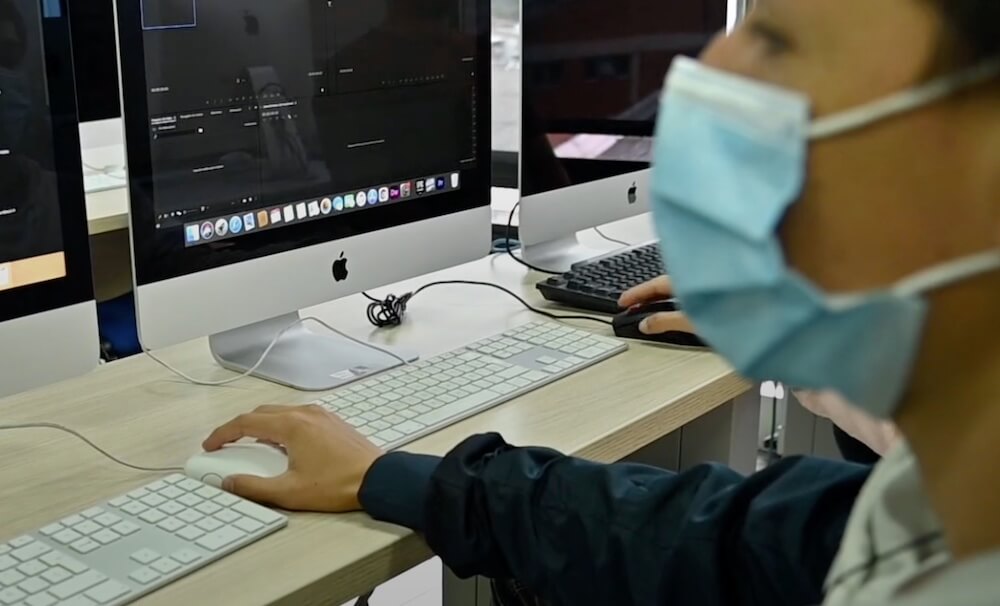 With a fast-expanding digital ecosystem and a focus on inclusiveness, Colombia’s private sector is reshaping the economy.

The businesses that power Colombia’s private sector are as diverse as the country’s world-famous fauna and flora. But these enterprises have one thing in common: they are reinventing themselves for the digital era.

Despite the disruptions of COVID-19, a digital transformation is underway, and it reaches into pockets of society that have long been overlooked. Women entrepreneurs and migrants from Venezuela are benefitting from loans and other services made possible by banks’ institution-wide digitization. Tech-based businesses are attracting investments, and more students are engaging in online learning to gain the skills they will need for competitive industries.

We asked entrepreneurs, students, and innovators how the changes rippling across Colombia are creating new opportunities. Here’s what they said.

A micro-loan that changed lives

As Sandra Milena Cerón Osorio looks back on the worst period of her life—when, at age 11, she was forced to cook, wash, and clean the house of relatives who had promised to send her to school—she is amazed at her own fortitude.

Cerón, now a 43-year-old shop owner in Bogota, never progressed past fifth grade, and by age 19 she was an unemployed single mother of three young children. To support her family, she walked door to door selling tinto, a local specialty coffee, in thermoses. Her three children and the family dog accompanied her on her daily sales rounds.

But when she found out that banks offer loans to people with business ideas, she approached Banco de las Microfinanzas Bancamía S.A (known as Bancamía), the first microfinance bank in Colombia, and shared her dream of opening up a neighborhood shop. In 2012, Bancamía, an IFC client, lent her 600,000 pesos (at that time about $330).

Cerón’s shop, which sells “a little bit of everything,” soon attracted a stable clientele from the neighborhood. She repaid the loans promptly, and each year Bancamía increased the amount of its loan. Over time, Cerón expanded the business, and the income allowed her to send her children to school. From the start, she has been using Bancamía’s mobile banking app to make payments and transfer money between accounts. The bank’s digital channels also allow her to access credit and savings without ever leaving her shop unattended.

“The first loan changed my life,” she said. “I became an independent woman. I didn’t have to work for a boss anymore or have somebody tell me what to do, I also got more time to be with my kids and work for myself.” The steady income allows her to “put better food on the table, and pay for my rent and utilities. My kids and I now live more comfortably,” she said.

Bancamía’s microfinance program was created in 2008 for people just like Cerón. Women comprise 54 percent of Bancamía’s approximately 1.5 million clients. The bank, part of the BBVA Microfinance Foundation Group, provides resources to micro-, small-, and medium-sized enterprises (MSMEs), which make up 99.6 percent of the country’s businesses and contribute 80 percent of employment, according to iNNpulsa, the entrepreneurship and innovation agency of the Colombian government. Bancamía’s average loan size is $1,250.

Bancamía’s focus on micro-entrepreneurs springs from an awareness that most of them “face great social, economic, and geographic barriers to access the formal financial system,” according to Miguel Ángel Charria Liévano, executive president of Bancamía.

To address that lack of access, “we are creating financial products and services tailored to the realities of the most vulnerable sectors, expanding our presence in municipalities where entrepreneurs are needed the most, bringing the bank’s digital services to their companies, and working for the economic empowerment of women,” Charria said. “We are committed to including these populations in the country’s growth.”

Even though MSMEs “constitute the basis of the country’s economic growth,” as the OECD has found, access to finance is a major hurdle for Colombia’s women entrepreneurs. The impact of the pandemic has deepened this need for financing: Women-owned MSMEs in Latin America have reported a “drastic drop” in sales because of COVID-19, and those entrepreneurs say they need new sources of capital to cover operational costs.

“In many cases, the social distancing requirements that followed COVID-19 meant that many of these businesses had to transition to digital sales, which involves new equipment, along with technical training and tailored marketing strategies,” according to Elizabeth Martinez de Marcano, IFC Country Manager for the Andean Region. “Ultimately, this shift to digital will be very beneficial, helping Colombia’s MSMEs reach a greater number of customers and position themselves for a digital future. Bancamía’s commitment to financing these enterprises is key,” she said.

Bancamía itself has engaged in a digital transformation to be able to offer the financial products and services that meet the evolving needs of MSME owners. IFC’s DigiLab, a digital accelerator for financial institutions, helped Bancamía enhance its digital banking channels, increase efficiency by 10 percent, and increase the client base by more than 10 percent.

In Cerón’s case, the support she received from Bancamía as she built her business has already made an impact on the next generation of her family. Her youngest daughter, with whom she used to hold hands while knocking on doors to sell tinto, just graduated from university with a civil engineering degree.

Cerón feels great satisfaction knowing that she was able to provide for her family. Sitting behind the counter of her shop, Cerón said that even though there were times when she doubted herself, her children’s optimism kept her going. “Life is full of ups and down so I thought I wouldn’t be able to do this, but then came the day my oldest daughter said ‘Mom, let’s do it! We are strong!’”

Since that day, Cerón said, she has never looked back.

Mauricio Bolaño Nolavita still can’t quite believe that he made it to university. In the region where he grew up, on Colombia’s Caribbean coast, most families depend on the seasonal harvest to eke out a living, and school is not a priority. Many in the area are Kogis—indigenous people—and because they don’t have access to the Internet, they cannot apply for university, much less pay for it.

But Bolaño knew from an early age that he wanted more than his community could offer. “When I was just leaving primary school, I was barely 10 years old, and my dream was to obtain a university degree,” he said. “That is what I have always wanted from the time I was a child. I would always tell my parents that I wanted to study more.”

A mentor helped Bolaño navigate the college application process, and now, at age 25, he is in a degree program at Uniminuto, a university founded for low-income students just like him, who have no other access to higher education. The school is based in Bogota and has a presence in 60 municipalities across Colombia.

Providing access to higher education is important because Colombia has one of the highest levels of income inequality in the world, and the second highest among 18 countries in Latin America and the Caribbean. Inequality in access to education leads to inequality in access to good jobs, making Colombia among the countries where inequalities are the most persistent across generations. It’s not just a problem for individual families—this high level of inequality constrains Colombia’s economic growth and social progress, as the World Bank has found.

But just as the pandemic disrupted students’ plans across the globe, it threatened to interfere with Bolaño’s goal of graduating and launching a career. Because of social distancing requirements, he was instructed to return to his hometown and engage in digital learning from there—which was impossible, because his community has no internet access. He found a place to live in Bogota, on his own, but immediately faced another hurdle.

“It was very difficult for me at first because I didn’t understand the digital platforms. I couldn’t manage the first class,” he remembered. “I did what I could, where I could, but sometimes I was lost.” University tutors taught him digital learning skills and helped him catch up so he could attend classes virtually, submit work online, and stay on track. He now feels better prepared to work on other digital platforms he encounters as well.

Uniminuto’s transition to online learning was faciliated in party by the Digital for Tertiary Education Program (D4TEP), which IFC created to assist higher education institutions in developing, implementing, and funding their digital transformation strategies.

D4TEP, a global initiative, was developed, piloted, and launched specifically to respond to pandemic-related needs. In addition to D4TEP-related technology investments in Uniminuto, IFC’s most recent investment of approximately $25 million will help Uniminuto modernize and expand its campuses with a focus on enrolling underprivileged students and boosting online programs.

Digitization as an “inflection point”

The digital transformation of higher education in Colombia became urgent in the context of the COVID-19 pandemic, but strengthening the country’s overall digital infrastructure has been a priority for many years.

“Colombia is betting on productivity driven by digital transformation to help leverage the recovery of its economy,” according to bnamericas, a firm that analyzes economic trends across Latin America.

That productivity is getting a boost from companies like TPaga. Bogota-based TPaga, which calls itself “a financial super-app,” offers a wide variety of digital financial services to people who do not have bank accounts. With nothing more than a cellphone, individuals can open up a bank account, pay and receive payment for products and services, and establish an income and credit history. TPaga has 1.5 million users, which amounts to one in 50 Colombians.

TPaga cofounder Andrés Gutierrez drew inspiration for TPaga from M-Pesa, AliPay, Venmo, and ApplePay, but has tailored its services to Colombians’ needs. “Some analysts say that people who are unbanked aren’t interested in becoming part of the financial system, but in Colombia, people are screaming for financial inclusion,” Gutierrez said. “They want to save. They want credit.”

TPaga’s plans include an expansion into financial education and even mutual fund investing. It recently received $10 million in funding from various investors.

Other tech-based businesses in Colombia are also expanding the country’s digital ecosystem. Investors are paying attention: Colombia is now the third most valuable venture capital (VC) market in Latin America, after Brazil and Mexico. In 2020, $469 million was invested in Colombia’s VC enterprises.

Colombian innovators are applying their tech know-how to some of today’s most pressing problems, such as climate change and COVID-19. OT Services, a Colombian company that uses technology to develop sustainable cooling solutions, has just begun field-testing solar air-conditioning and bipolar ionization technology at a pharmaceutical plant. The bipolar ionization technology improves air filtration and quality, a key concern during the COVID-19 era. The pilot aims to reduce energy consumption by up to 97 percent during sunlight hours, and up to 60 percent during cloudy conditions and at night. Better cooling technology is needed throughout the region because traditional models are often inefficient and costly, accounting for 15 percent of energy consumption worldwide.

OT Services’ pilot was facilitated by IFC’s TechEmerge program. Innovations like those from OT Services are particularly important opportunities for emerging markets, said William Sonneborn, senior director of disruptive technologies at IFC. “Sustainable cooling technologies help the most vulnerable adapt to adverse impacts of climate change, support health care services and food supply chains, can decrease costs for businesses, and increase productivity. These are all critical aspects of a climate-smart strategy for the future of our planet.”

As in other emerging economies, the digital surge in Colombia has the potential to benefit businesses, students, consumers, and a wide swath of society—becoming, as Sonneborn said, “a major inflection point in the history of development.”