Digital – the only superpower you really need? 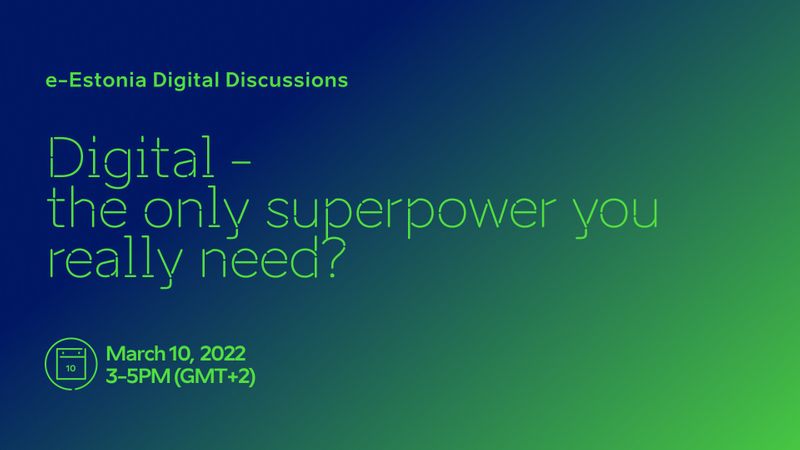 We have top global digitalisation experts discussing where their countries and the world is heading in the following years. Topics to be covered:

Before becoming the Estonian Government CIO, Luukas Ilves was the Head of Strategy at cyber security and blockchain company Guardtime while having previously been the company’s Head of Innovation and Research cooperation. Before Guardtime, he was the Deputy Director and Senior Fellow of the Lisbon Council. During Estonia’s presidency of the Council of the European Union, Ilves led the digital policy team and program at the permanent representation of Estonia to the EU. He has also worked in the Estonian Information System Authority (RIA) and Ministry of Defense.

Mr. Aaron Maniam, Deputy Secretary at Ministry of Communications and Information of Singapore;

He has also served in the Ministry of Foreign Affairs, Centre for Strategic Futures, Civil Service College, and Ministry of Trade and Industry. In his free time, he writes poetry, facilitates inter-religious dialogues, and teaches at the National University of Singapore’s Scholars Programme. He is a Young Global Leader of the World Economic Forum, an Asia 21 Young Leader of the Asia Society, and a Fellow of the Royal Society for the encouragement of the Arts, Manufactures, and Commerce.

Barbara Ubaldi is a Senior Policy Analyst at the OECD, responsible for the organisation’s work on Digital Government, Open Government Data, and Data-Driven Public Sectors since 2010. In this capacity, she has managed several thematic reviews on digital government and open government data and launched the OECD’s project on data-driven public sectors. She also co-ordinates the organisation’s work on digital government indicators. She oversees the work on using new technologies by governments, including cloud computing, social media, mobile technologies, machine learning algorithms, and artificial intelligence.

Neil Warsop is the Professional Services Deputy Director at the Government Digital Service (GDS). Prior to joining GDS, Neil has worked in a range of policy delivery and Senior Civil Service roles in the Cabinet Office and Business Department, including supporting the Chief Executive of the Civil Service on Transformation and Reform and as a Programme Director at the Department for Business, Energy and Industrial Strategy.  Neil is a Major Project Reviewer for the Infrastructure and Projects Authority and spent 8 years in HM Treasury.

Mr. Oliver Väärtnõu, CEO of Cybernetica, the company that has had a leading role in developing the X-Road – the backbone of the Estonian digital state.

Oliver Väärtnõu has served as the CEO of Cybernetica since 2014. Before joining the company, he used to work as the Head of the Government Office Strategy Bureau and the Executive Director of the Technology Development Centre of Eliko OÜ. Oliver Väärtnõu has worked in Sweden and Denmark, focusing mainly on international relations and management consulting. He is a member of the Research and Development Council of the Prime Minister’s Office, a member of the Estonian Chamber of Commerce and Industry Board, and a member of the SCCFIV Council. He holds a Master’s degree in Innovation and Technology Policy from the University of Sussex.