1. “Our house is still on fire. Your inaction is fuelling the flames by the hour.”

When it named Greta Thunberg Person of the Year 2019, Time Magazine wrote: “she is an ordinary teenage girl who, in summoning the courage to speak truth to power, became the icon of a generation.”

Greta spoke truth again from the stage at Davos, calling out the well documented consequences of the world’s failure to ask fast enough on climate change.

“I wonder, what will you tell your children was the reason to fail and leave them facing the climate chaos you knowingly brought upon them? The 1.5-degree target? That it seemed so bad for the economy that we decided to resign the idea of securing future living conditions without even trying?

At the end of the week, Greta took part in a #fridaysforfuture school strike in Davos town. 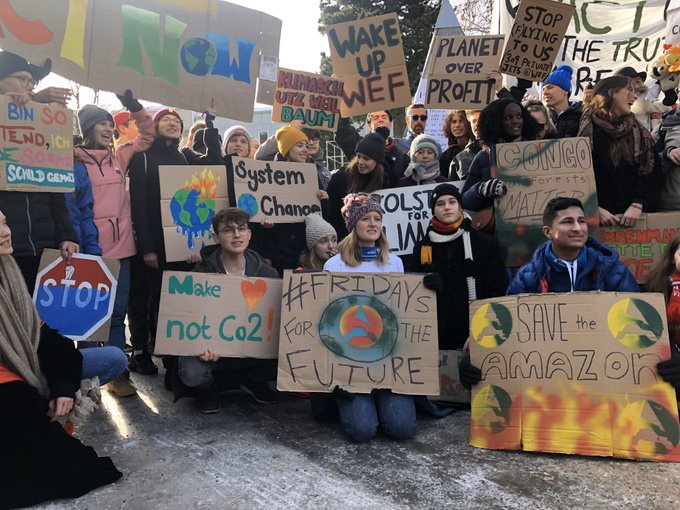 2. “We must reject the prophets of doom”

Calling for optimism was US President Donald Trump, who championed the US approach to energy and the economy in his second address at Davos.

“We continue to embrace technology not to shun it. When people are free to innovate, millions will live longer, happier and healthier lives. For three years now, America has shown the world that the path to a prosperous future begins with putting workers first, choosing growth and freeing entrepreneurs to bring their dreams to life,” he said.

You can watch his special address in full here.

3. “Humankind has declared a war on nature and nature is striking back in a very violent way.”

Greta was not alone. From the General-Secretary of the UN to the UK’s Prince Charles, from Finland’s Sanna Marin to Pakistan’s Imran Khan, the climate emergency and how to heal our relationship with the natural world dominated discussions here this week.

In his special address, Antonio Guterres warned that nature would recover; but we might not.

4. From UpLink to a Trillion Trees, we saw the green shoots of solutions….

The Forum unveiled UpLink, an open platform to unite problem-solving entrepreneurs with the backing they need from the World Economic Forum’s communities. The idea is to scale up solutions to the challenges the world faces – from climate change to poverty – to meet the UN’s global goals for a fairer world by 2030.

Other big initiatives released this week were a global plan to grow, restore and conserve 1 trillion trees around the world in a bid to restore biodiversity and help fight climate change, and a Reskilling Revolution that aims to help provide 1 billion people with better education, skills and jobs by 2030.

This is why creativity and empathy will be as important a…

5. …And a terrifying glimpse into what could happen if we get tech wrong

The historian Yuval Harari outlined three major threats for the 21st century. Elsewhere, Google CEO Sundar Pichai warned that the biggest risk we faced with AI was not making use of its tremendous potential for good.

6. “We deserve better than this,” the youngest participant told Davos about gun violence

When 17 students were killed at Marjory Stoneman Douglas high school in Parkland, Wadler was 11 – and desensitized.

“Of course I was horrified, but it was something that had happened so many times before, so the scary part was that I was numb to it. It was almost mundane,” said the 13-year-old in conversation with musician and co-executive producer of documentary Parkland Rising, will.i.am.

She organized a walkout at her elementary school and has met survivors from Parkland.

“Being able to talk to the kids and share their pain and realise we deserve better than this was a great experience.”

7. Capitalism as we know it is dead.

In a session on the future of stakeholder capitalism – the Forum’s underlying belief that businesses are responsible to all parts of society – business leaders called for a new era.

Marc Benioff, Chairman and Co-Chief Executive Officer of Salesforce, said: “Capitalism as we have known it is dead. This obsession with maximising profits for shareholders alone has lead to a climate emergency.”

8. People talk less now than they did in the Cold War, says Angela Merkel

Germany’s Chancellor gave a special address which called out the polarization of our societies.

“When we now have a world where perhaps lack of speech is even more pronounced than during the Cold War – where we had an orderly channel of communication between the different sides, then I can only plead: even if you find it so difficult to talk to the other person then please don’t abandon this, otherwise you will be in your digital bubble … you will be talking to people of the same view … and that leads us right into catastrophe.”